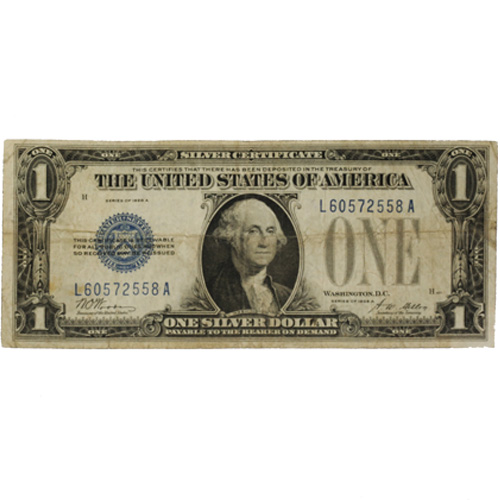 Although most of the $1 Silver Certificates issued from 1923 (large-size) until the end of the series in 1964 had roughly the same visual of President Washington on the obverse, there were minor changes made throughout that resulted in different series releases. 1928 featured a total of six series issues in the $1 Silver Certificate, with all changes coming in the form of the signatures of the Treasurer of the United States and the Secretary of the Treasury. These changes were noted by the use of a letter after 1928, with 1928 being the first iteration, followed by A, B, C, D, and E releases.

The obverse of the 1928-1928B $1 Silver Certificates available here offers the chance to own one of the first three series releases in 1928. All notes have the portrait of President George Washington in the center with blue ink used for the serial number and the US Treasury seal. The signature of the Treasurer of the United States and the Secretary of the Treasury, respectively, include Tate and Mellon on the 1928 Series, Woods and Mellon on the 1928A Series, and Woods and Mills on the 1928B Series.

On the reverse of the 1928 $1 Silver Certificates is the same design element regardless of series. Here, the face value is noted in large text at the center of the design field. The numeric value of the note is identified in the four corners and at either side of the central design element.

These 1928-1928B $1 Silver Certificates come with plastic currency sleeves and are in Fine condition. Paper notes in this condition retain some of the original crispness, while showcasing light fraying or rounding at the corners. You will also notice the presence of creases, wrinkles, and folds on the note. Fine and Fine-plus notes are visibly the same at a glance, but when looking deeper at the flaws, many are the same.