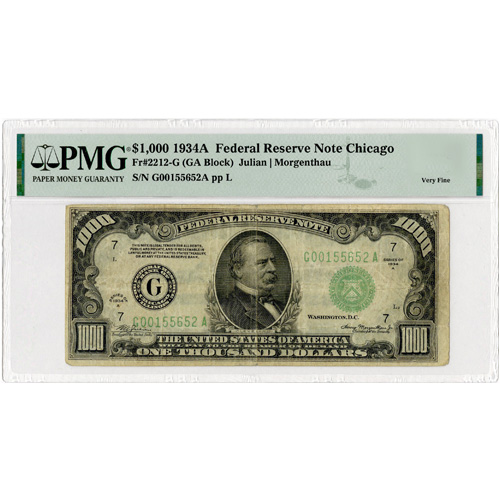 The 1918 Series of Federal Reserve Notes marked the introduction of $500, $1,000, $5,000, and $10,000 notes. These notes were all removed from circulation in the United States beginning in the 1960s, and once collected by the Treasury, the vast majority were destroyed. This makes remaining samples a true treasure of a bygone era in American paper money.

All of these 1934 $1000 Federal Reserve Notes are available to purchase here with a PMG Very Fine 25 grade. Housed in plastic currency sleeves for protection, these notes show only modest signs of handling and use, with folds and soiling of the paper common.

On the obverse of 1934 $1000 Federal Reserve Notes, you will find a portrait of President Grover Cleveland. The president’s portrait features in the common porthole frame with his effigy set in a three-quarter right-profile relief. The design replaced Alexander Hamilton’s bust on the note in 1934, with Hamilton having featured on the 1918 Series of $1000 Federal Reserve Notes. The reverse side of the note has only markings of the denomination.

Notes such as these 1934 $1000 Federal Reserve Notes were rarely seen by everyday Americans in the early 20th century. From the moment the notes were issued, most were held by banks and used to facilitate large transfers between banking institutions. Few Americans would have had the need for such a large bill in everyday use, and the larger denominations made it easier for banks to complete large transfers in an era without wire transfers, the Internet, and online banking.

Please contact Silver.com if you have any questions about these notes. You can call us at 888-989-7223, chat with us live online, or email us directly.