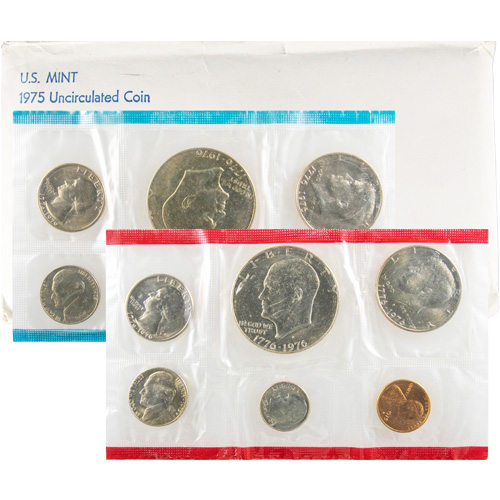 As a current coin collector, or someone looking to start your collection, US Mint Sets are just what you should be checking out. How else can you simply and cost-effectively purchase coins that are in brilliant uncirculated condition and are specimens of each of the coins used in circulation in a given year? And if you are looking for a particularly unique Mint Set, then look no further than this 1975 set. It contains 6 coins, but rather than all of them being dated 1975, only 3 of them are, the other 3 coins are dual-dated. Currently, Silver.com has these 1975 US Mint Sets available for purchase online.

There is a uniqueness to the 1975 Mint Set, setting it apart from all of the other annual Mint Sets. With the Bicentennial right around the corner, the US Mint decided not to produce the 1975 dated quarters, half dollars, and dollar coins. Anticipating an increased demand for these particular denominations, the Mint opted to instead begin production of the 1776-1976 Bicentennial coins in 1975 and include them in the 1975 Mint Sets.

In this Mint Set, the Bicentennial Eisenhower Dollar that is included is the Type 1 version, which means it has thicker lettering on the reverse. The Washington Quarter, Kennedy Half Dollar, and Eisenhower Dollar in the sets are the Bicentennial versions, meaning they feature new reverse designs and are dual-dated. Each of these new reverse designs was the result of an open to the public design competition run by the US Mint.

Questions? If so, please contact our Silver.com Customer Service team and we will gladly assist you. We can be reached via phone at 888-989-7223, via online live chat, or via our email.