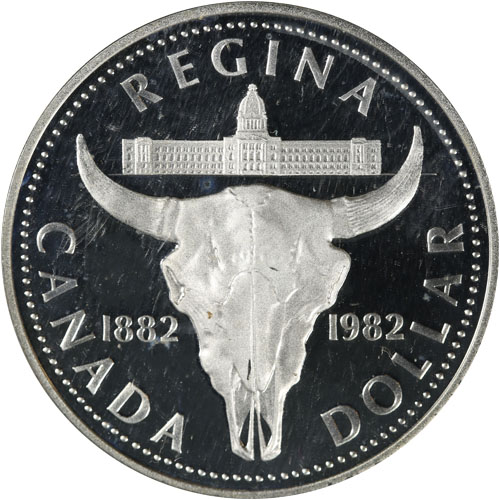 This Canadian Silver Dollar release from 1982 is sure to be a favorite for coin collectors everywhere. This coin brings both beauty and simplicity, mixing together two metals to form a valuable and high-quality bullion product. The 1982 coin was minted through the Royal Canadian Mint and designed by Huntley Brown to commemorate the history of Canada and the city of Regina. Today, the 1982 Proof Canada Regina Centennial Silver Dollar can be purchased online from Silver.com.

The 1982 Proof Canada Regina Centennial Silver Dollar was released in 1982 and has become a popular product for many collectors and investors. This coin is made with 50% copper and 50% silver, offering a unique look and finish with the mixture of the two metals. This coin has been packaged in a black clamshell box and wrapped in a graphic cardboard sleeve wrapped around the box. The cardboard sleeve lists the Royal Canadian Mint as the origin mint for this coin.

The 1982 Proof Canada Regina Centennial Silver Dollar honors a special historical moment in Canada. This coin was manufactured to commemorate the founding of the city of Regina 100 years ago in Saskatchewan. This is a lesser-known city in Canada that was founded in 1882, which is marked on the reverse design of the coin.

The obverse of the 1982 Proof Canada Regina Centennial Silver Dollar shows the viewer the portrait of Queen Elizabeth II. The profile of Her Majesty was designed by Arnold Machin and features the Queen’s head, neck, and shoulders. Around the coin’s edges is a circle of small balls that surrounds the obverse design. Two inscriptions also appear on the obverse, which are “ELIZABETH II” and “D.G. REGINA”.

On the reverse of the 1982 Proof Canada Regina Centennial Silver Dollar is the design created by Huntley Brown that was made to celebrate the centennial anniversary of the founding of Regina. A large skull of a bison is on the center of the reverse, with the years “1882” and “1982” printed on either side of the skull. The Saskatchewan Legislative Building appears above the bison skull, with the inscription “REGINA” and “CANADA DOLLAR” engraved around the skull.

To learn more information about this listing, or if you have any questions about silver for sale, please reach out to us at Silver.com. Our customer service team can be contacted via online live chat, email, or by phone at 888-989-7223.