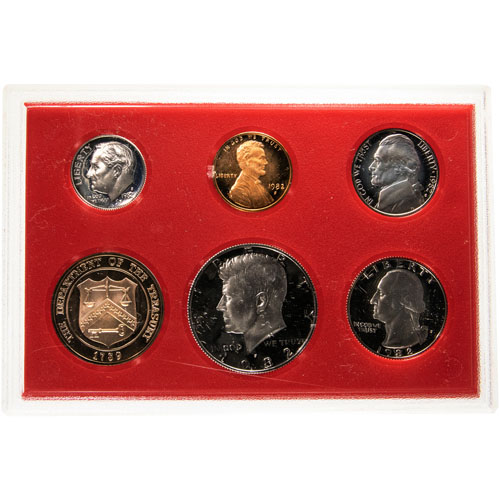 With 1981 being the last year for the Susan B. Anthony Dollar, the 1982 US Mint Proof Set reverted back to a set of 5 coins. Since the packaging for the 1982 Proof Set did not change, in the spot that the Dollar previously occupied, the US Mint placed a bronze Proof Treasure Token. The face value of the 1982 Proof Set dropped from $1.91 to $0.91, however, the original issue price remained at $11.00. Even with this reduction in face value but no corresponding price reduction, the US Mint still sold 3,857,479 of the 1982 Proof Sets. This was an almost minuscule decrease from 1981 Proof Set sales. All coins in the Set were intended to have a cameo or deep cameo finish. This Set was made by the US Mint in San Francisco. Presently, these 1982 US Mint Proof Sets are available for purchase from Silver.com.

The down-sized packaging created by the Mint in 1980 was short-lived as the 1982 Proof Sets were the last Sets to utilize the new packaging. This packaging had individual slots in a red plastic insert that held the coins. The red insert was sealed into a clear plastic case, which has a black plastic frame that could slide over it and be used as a display stand. The outer cardboard box had a single opening at the top to slide the frame into.

Copper prices began increasing in 1973, causing the intrinsic value of the Lincoln Cent to approach its monetary value, resulting in people beginning to hoard them. The US Mint and Congress began having discussions to change the composition of the Lincoln Cent, which at this point was made up of 95% copper. However, it wasn’t until yet another increase in the price of copper, beginning in 1981, that the Mint decided to actually change the composition. In 1982, the Mint made half of the 1982 pennies of 95% copper and, as the changeover was completed, the other half were made of 97% zinc with a plating of copper.

Each 1982 Proof Set includes one each of the Lincoln Cent, Jefferson Nickel, Roosevelt Dime, Washington Quarter, and Kennedy Half Dollar. The sixth spot in the holder, previously occupied by the Dollar, now contains a token from the Department of the Treasury that is struck in bronze.

Have questions? The Silver.com Customer Service team is available to answer them. We can be reached via phone at 888-989-7223, via online live chat, or via our email.