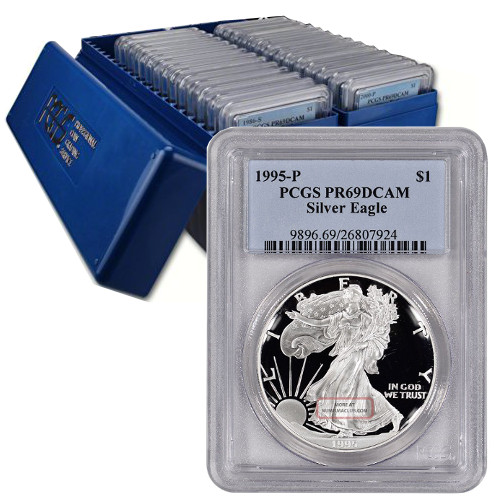 PLEASE NOTE – We will do our best to ship these in the PCGS 25-coin plastic bins, but it is dependent on our supply. We cannot guarantee you will receive the PCGS holders – you may receive 29 loose coins (in their PCGS slabs).

The only production year not represented in this 2009. While a bullion coin was struck this year, no proof coin was produced. Additionally, this set does not include the 1995-W proof from the West Point Mint. Less than 100,000 of these proofs were struck, making them extremely rare. A different 1995 proof will be provided with a P mint mark from the Philadelphia Mint.

Each Silver American Eagle proof in this coin set received a near-perfect grade of PR69 from the PCGS. Near-perfect coins have their full, original luster, but contain as many as two minor, detracting marks. These marks do not appear in the primary visual field on the coin’s surface.

Silver American Eagle proofs feature Adolph A. Weinman’s Walking Liberty image, first designed in 1916, on the obverse side. The reverse side of each proof bears John Mercanti’s heraldic eagle. Mercanti, a US Mint chief engraver, created the eagle image specifically for this coin series.

The United States Mint produces Silver American Eagle proof coins using silver sourced from within the US. This coin set includes one coin from each production year to date, including the 2015 proof.