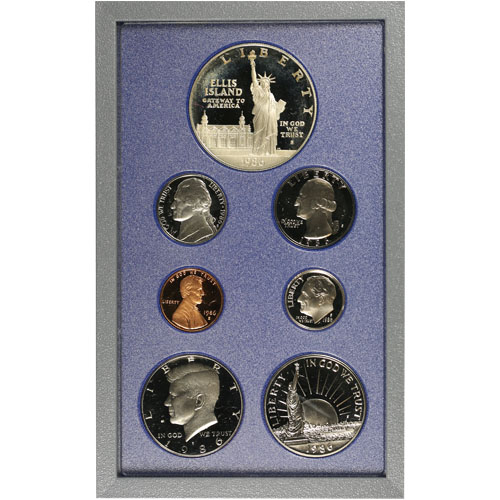 The United States Mint issued Proof Prestige Sets for collectors in the 1980s and 1990s. The sets offered proof versions of the nation’s cupro-nickel circulation coins, along with one or more commemorative issues available for each date mark. In 1986, the celebration of the Statue of Liberty’s recent restoration resulted in the inclusion of two Liberty-themed coins in the set. Now, 1986 US Mint Proof Prestige Sets are available to you for purchase online from Silver.com.

In 1982, the United States was preparing to celebrate the 100th anniversary of the Statue of Liberty. However, at the time the statue was worn and faded, and desperately in need of restorations. It took a grassroots effort, and a little help from the United States Mint, to raise the money to restore the beloved symbol of America.

The role of the United States Mint included the production in 1985 and 1986 of two Liberty-themed coins. A clad Liberty Half Dollar was offered alongside a Silver Liberty Dollar that boasted 90% silver content and 10% copper. Both coins are included in the 1986 US Mint Proof Prestige Set.

Obverse designs on the coins in the 1986 US Mint Proof Prestige Set include the familiar faces of Presidents Lincoln, Jefferson, Roosevelt, Washington, and Kennedy on the penny, nickel, dime, quarter, and half dollar, respectively. The Liberty Half Dollar features a portrait of immigrants arriving in America, while the Silver Liberty Dollar depicts the Statue of Liberty.

Reverse visuals on the 1986 US Mint Proof Prestige Set Coins feature varying images on the circulation pieces. The Liberty Half Dollar depicts the Statue of Liberty with the New York City skyline in the background. The Liberty Silver Dollar features Liberty’s shining torch.

These 1986 US Mint Proof Prestige Sets come with a US Mint presentation booklet. Inside this booklet are all seven of the coins available for 1986. Each coin is a beautiful proof specimen with mirror-like fields.

Silver.com customer service is available to assist you at 888-989-7223. Additionally, you can contact us online using our live chat and email address features.

Images shown are examples only. Actual item appearance is subject to change, but will always correlate with title and des