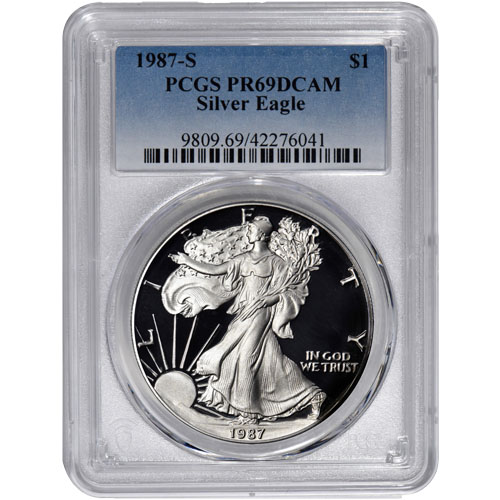 The second release of the Proof Silver American Eagle in 1987 remains one of the highest-minted coins in the history of the collectible series, but also one of the hardest to find among current collectors. Certified versions of the coin are even harder to find as early collectors hold on to these early issues from the Proof Silver Eagle Series. Now, near-perfect 1987-S 1 oz Proof Silver American Eagles are available to you for purchase online at Silver.com.

The debut of the Proof Silver Eagle in 1986 was met with intense interest from coin collectors. In most cases, it is the first-ever issue of a proof coin that delivers the highest demand. The 1.446 million coins sold in 1986 remains the highest mintage in the history of this long-running series. The 1987 release saw a 40% drop in interest, though the 1987 mintage remains the sixth-highest in the series to date.

The obverse of these 1987-S 1 oz Proof Silver American Eagles comes with the image of Walking Liberty. Created by Adolph A. Weinman, this effigy of Liberty was designed in 1916 and originally featured on the circulating US half dollar.

On the reverse of 1987-S Proof Silver Eagles is the heraldic eagle of the United States. This design comes from John Mercanti and depicts the American bald eagle with the US national shield. The eagle clutches the arrows of war and the olive branch of peace, with a triangular cluster of 13 stars over its head.

These 1987-S 1 oz Proof Silver American Eagle Coins are near-perfect coins with a PR69 grade from the PCGS. Coins in this condition showcase full, original mint luster have no more than two minor detracting flaws. To qualify for this grade, flaws are limited to minuscule contact marks or hairlines and must be outside the primary focal points. The DCAM designation assigned to these coins points out the presence of a strong frost on the design and a deeply-mirrored background field.