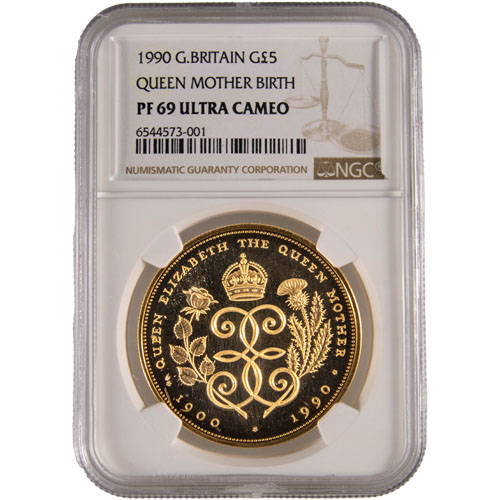 In 1990, the Royal Mint of England issued a rare 5 Pound gold crown-styled coin to mark the 90th birthday of the Queen Mother. The mother of Queen Elizabeth II, Elizabeth Bowes-Lyon was married to King George VI and reigned as the Queen of the United Kingdom until her husband’s death and the ascension of her father. Right now, 1990 Gold 5 Pound Proof British Queen Mother Birth Coins in certified condition are available to purchase online from Silver.com.

Each 1990 Gold 5 Pound Proof British Queen Mother Birth Coin offered here is in near-perfect condition. PF69 coins exhibit full, original mint luster and have no more than two minor detracting flaws present. Examples of these flaws include only minuscule contact marks or hairlines that must be located outside the primary focal points of the coin. Ultra-cameo specimens are coins that have strong, frosted designs and deeply-mirrored, clear background fields.

The 1990 release of a 5 Pound gold coin by the Royal Mint marked the 90th anniversary of the birth of Queen Elizabeth The Queen Mother. Born Elizabeth Angel Marguerite Bowes-Lyon, she was the wife to King George VI of England and mother to Queen Elizabeth II. From 1936 to 1952, she was Queen of the United Kingdom and the final British royal to serve as Empress of India.

The obverse side of 1990 Gold Proof British Queen Mother Birth Coins features a portrait of the reigning monarch of Great Britain, Queen Elizabeth II. Her Majesty is featured here in right-profile relief in the third-generation effigy from Raphael Maklouf. This design was created in 1985 and featured on British coins through 1997.

If you have any questions when you buy gold online, Silver.com is here to help. Please call us at 888-989-7223, chat with us live online, or simply send us an email with your inquiries.