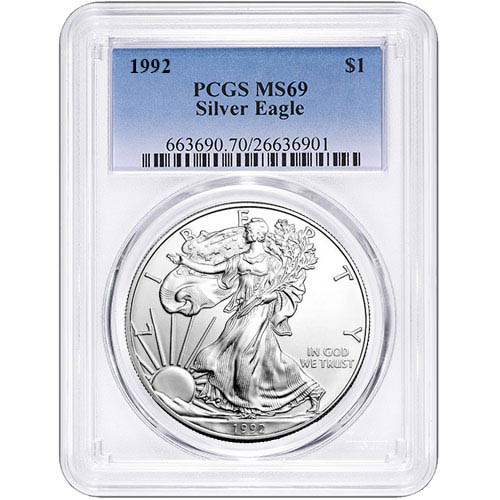 After demand grew for the Silver American Eagle from 1989 to 1991, mintage took a sharp decline in 1992. Improving economic conditions and falling silver prices resulted in lower demand for silver precious metals in general. The 1992 Silver Eagle saw its mintage fall back to levels seen in the 1980s. The 1992 1 oz Silver American Eagle Coin is now available to you for purchase online at Silver.com with a PCGS certification.

The final declared mintage for the 1992 Silver Eagles was 5,540,068. While this was lower than the previous two releases, it was a relatively high mark considering how the rest of the 1990s would playout for the Silver American Eagle in terms of demand and mintage figures. The following year would bring a bump in demand, but the 5.5 million coins issued in 1992 would look impressive compared to the years to follow.

Between 1994 and 1998, the Silver American Eagle coin never surpassed 4.8 million coins in a given year. The average annual number of units sold during this stretch was a paltry 4.2 million coins. This five-year period holds all of the top-five spots for the lowest mintage figures in the series.

On the obverse of 1992 1 oz Silver Eagles is a depiction of Liberty. This design from Adolph A. Weinman was created in 1916 and is known as Walking Liberty. She is depicted walking toward the sun on the horizon as it crests a mountain. It is believed to have been based on the French coin design of a woman spreading grain seeds known as the “sower.”

The reverse of 1992 Silver American Eagle Coins includes the heraldic eagle of the United States. The design includes the American bald eagle behind the national shield. The bird clutches the arrows of war in one talon and the olive branch of peace in the other. There is a triangular cluster of 13 stars over its head as well.

1992 1 oz Silver American Eagle Coins offered in this listing come with a near-perfect certification. Coins with a Mint State 69 grade have full, original mint luster with a maximum of two minor detracting flaws. Examples of acceptable flaws at this level include minuscule contact marks or hairlines.

We encourage Silver.com customers to call us with questions at 888-989-7223. You may also connect with us online through our live chat and email address features.