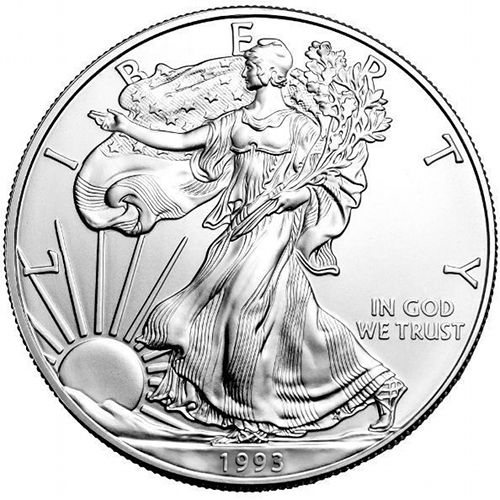 Today the bald eagle and Lady Liberty are forever remembered with lasting images on the 1993 1 oz Silver American Eagle coin. The first coin in the series was minted in 1986, and since then all coins have shared the same specs. Each Silver Eagle coin features 1 troy ounce of 99.9% silver and has a $1 USD face value. The 1993 coins in this collection are available in uncirculated condition.

In response to mounting federal deficits and a surplus of silver in the Defense National Stockpile, the administration of President Ronald Reagan began a push in 1981 to use this excess silver to mint a commemorative coin series. The proceeds from the sale of these commemorative coins were designated for use in balancing the federal budget. Although the coin was met with controversy at first, mainly as a result of its deflation of silver values upon release, the coin has become a popular cultural artifact. Today, the 1993 1 oz. Silver American Eagle, and its predecessors and successors, is considered the official silver bullion coin of the United States.

The coin features two images crafted by men exactly 70 years apart. The obverse side of the coin features Adolph A. Weinman’s “Walking Liberty” image. Originally designed for use on the Walking Liberty Half Dollar (produced 1916 to 1947), Lady Liberty has lasted almost 100 years on American coins to grace the obverse side of Silver American Eagles.

On the reverse side of the coin is John Mercanti’s bald eagle design. Crafted in 1986 for use on the Silver American Eagle, the image features a bald eagle with a heraldic shield. In its right talon, the eagle clutches an olive branch in a sign of peace. In its left talon, the eagle clutches arrows signifying its preparation to defend this land. Mercanti is the chief designer at the US Mint.

If you would like to learn more about these coins or have any questions don’t hesitate to give us a call at 1-888-989-7223. You can also get in touch through the live chat feature or by sending us an email. You may also like to view our full selection of the 1 oz Silver American Eagle coins which are available in certified and uncirculated condition.