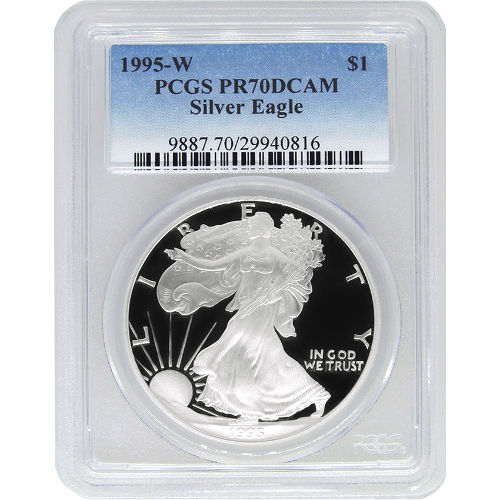 The Proof Silver American Eagles are a popular collectible piece from the United States Mint. Introduced in 1986, the most popular date marks in the series are the original 1986 release and anniversary date marks. Among those anniversary date marks, the 1995-W coin is the most coveted as it has the single lowest mintage in the history of the program. Today, 1995-W 1 oz Proof Silver American Eagles in perfect condition are available to you online at Silver.com.

All of the 1995-W 1 oz Proof Silver American Eagles available here come with a perfect certification from the PCGS. Coins in this condition have full, original mint luster and no detracting flaws of any kind on the elements or fields. Proof coins have frosted designs and mirrored backgrounds. With a DCAM designation included, these coins showcase a stronger frosted design element with a deeply-mirrored, clear background field.

Walking Liberty is featured on the obverse of 1995-W Proof Silver American Eagles. This image was created in 1916 by Adolph A. Weinman for the United States Mint and featured on the US half dollar until 1947. The design shows Liberty walking in left-profile relief toward the sun on the horizon carrying branches of oak and laurel in her left hand.

Please don’t hesitate to reach out to Silver.com with any questions. Our team is available to you at 888-989-7223, online using our live chat, and through our email address.