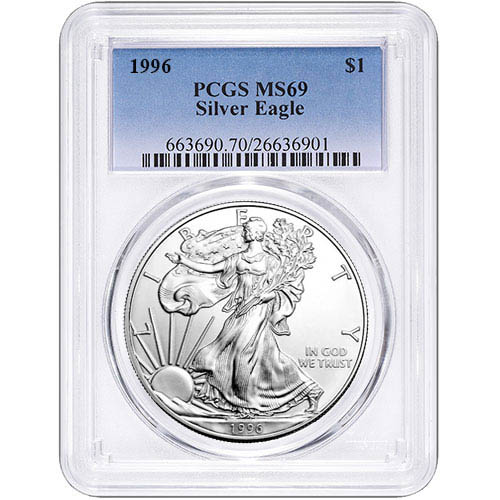 The 1996 1 oz Silver American Eagle Coin is remember as the one with the lowest mintage figure in the program’s history. Though other date marks are significant as anniversary releases, the 1996 coin is one of the hardest to come by among the silver bullion options as a result of its low mintage. Right now, 1996 1 oz Silver American Eagle Coins are available to purchase online at Silver.com with a PCGS certification.

Each 1996 1 oz Silver American Eagle Coin in this product listing is available to you with a Mint State 69 certification from the PCGS. The coins exhibit full, original mint luster and no more than two minor detracting flaws. Examples of acceptable flaws at this certification level include only minuscule contact marks or hairlines found outside the primary focal points of the coin.

The final declared mintage of the 1996 1 oz Silver Eagle was 3,603,386 coins. This remains the lowest mintage figure in the program’s history, with the next two closest low-mintage points more than 600,000 coins higher than these coins. During 1996, the price of silver held steady on average at $5.20 per ounce, maintaining higher prices compared to the early 1990s. After the release of 1996 Silver Eagles, the program enjoyed steady increases in mintage for the next 20 years.

On the obverse of 1996 Silver American Eagle Coins is the image of Walking Liberty. Her effigy as featured here was created in 1916 by Adolph A. Weinman and featured on the half-dollar coin until 1947. It depicts Liberty in left-profile relief as she walks toward the sun on the horizon.

The reverse of 1996 1 oz Silver Eagles is the heraldic eagle of the United States. This seal was first used on American coins produced by the US Mint in 1794. The shield is supported by the American bald eagle, which clutches the arrows of war in one talon and the olive branch of peace in the other talon.

If you have any questions, please don’t hesitate to contact Silver.com customer service. Our team is available to you at 888-989-7223, online using our live chat, and via our email address.