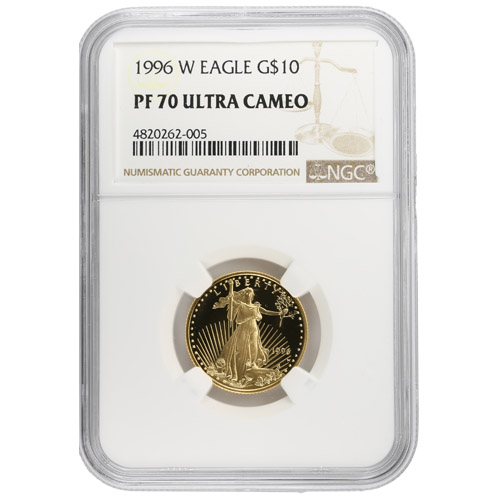 The popularity of the Proof Gold American Eagle couldn’t sustain demand following the 1995 10th-anniversary issue. The coins released by the US Mint between 1996 and 1998 experienced falling mintage figures in each consecutive year to establish low-mintage marks that would remain until the 2001 coins were released. The 1996 1/4 oz Proof Gold American Eagle is currently available to you for purchase online at Silver.com in perfect condition.

Throughout the early- and mid-1990s the Proof Gold American Eagle from the United States Mint maintained steady demand from gold collectors. Those individuals buying gold in the Proof Gold Eagle Series managed to hold most of the coins within the same 8,000-coin range per weight each year.

In 1996 though, the demand from collectors began to fall off. 1996 was the first of three consecutive years of availability stretching through 1998 in which the Proof Gold Eagles would drop annually. The 1996 1/4 oz Proof Gold American Eagle Coin dropped by roughly 9,200 coins from the 10th-anniversary coins in 1995 and would fall a further 9,200 in total by 1998.

The obverse face of Proof Gold American Eagle Coins includes one of the nation’s most iconic coin designs. Created in 1907 by Augustus Saint-Gaudens, this vision of Liberty was originally used on the $20 Gold Double Eagle coin and helped spur a new wave of American coin design throughout the early 20th century that would culminate in 1916.

On the reverse side of 1996 1/4 oz Proof Gold American Eagles is a design of American bald eagles. This family-centric portrait includes a male eagle flying over the nest with a branch in its talons while a female protects a hatchling under her wing within the nest.

We encourage Silver.com customers to reach out to us with questions at 888-989-7223. You can also connect with us online through our live chat service and email address.