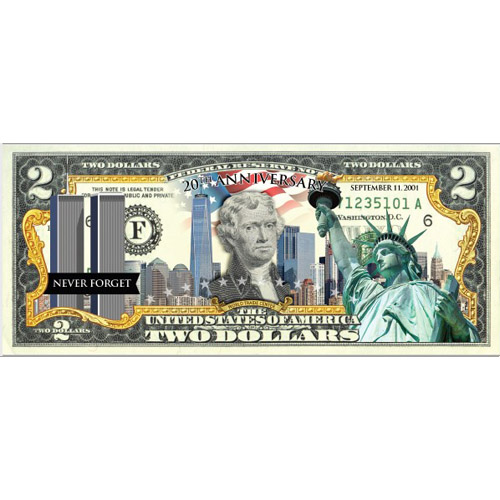 In 2021, the United States will pause to honor the 20th anniversary of the 9/11 terror attacks that claimed more than 3,000 American lives and forever altered the skyline of New York City. The strike on the United States was the most devastating since Pearl Harbor in 1941, but showcased American resilience as Ground Zero was cleaned up, a memorial established, a new Freedom Tower erected on the site rising from the ashes as a new World Trade Center. Now, $2 9/11 20th Anniversary Statue of Liberty Legal Tender Notes are available to you for purchase online at Silver.com.

The New York City skyline has some of the most famous structures in America. The Chrysler Building and Empire State Building were among the first major skyscrapers ever built in America and have been well-known in the American consciousness for nearly a century now. Of equal importance has been the Statue of Liberty.

Lady Liberty was a gift to the people of the United States of America from the people of France. For more than 130 years now, she has stood watch in New York Harbor. She has seen wave after wave of immigrants come to America in search of a new, better life. She also stood by helplessly on 9/11 as thousands of Americans lost their lives in the terrorist attacks that took down the Twin Towers, icons of the New York City skyline for three decades.

The obverse side of these unique $2 9/11 20th Anniversary Statue of Liberty Legal Tender Notes comes with a depiction of President Thomas Jefferson at the center. His effigy is surrounded on all signs by symbols of the Big Apple. Most impressive is the dominant figure of the Statue of Liberty to the right. Behind President Jefferson, the new One World Trade Center building rises above the New York skyline. On the left-hand side, the Twin Towers rise again.

On the reverse field of $2 9/11 20th Anniversary Statue of Liberty Legal Tender Notes is a scene capturing the signing of the Declaration of Independence. The scene featured here is based on an 1818 oil painting from John Trumbull.

These $2 9/11 20th Anniversary Statue of Liberty Legal Tender Notes come with protective folios and a Certificate of Authenticity. The notes are legal tender Federal Reserve Notes in crisp, clean, uncirculated condition. Each one has been enhanced with applications of color that capture the appearance of the Twin Towers, Freedom Tower, and the Statue of Liberty.