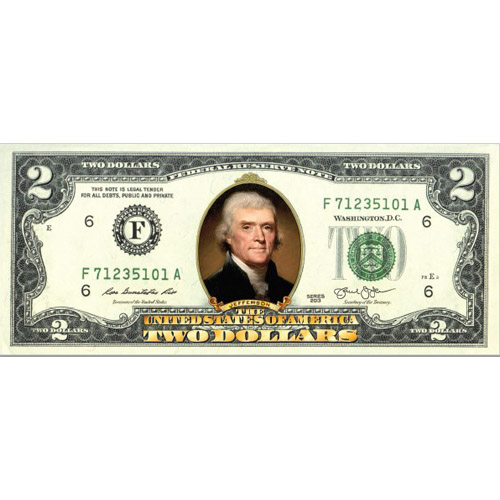 One of the more highly-produced Federal Reserve Notes happens to also be one of the least used in circulation. At one point, the $2 bill was printed in numbers similar to the $1 bill, but have been rarely used in recent years when compared to other bills in the Federal Reserve Note series. Today, $2 Colorized Legal Tender Notes are available to you online at Silver.com.

The $2 denomination in American paper money has been more widely distributed across historical note collections than many other existing denominations. The $2 bill was first issued in 1862 in the United States Not Series and has subsequently been printed in the Silver Certificate, 1890 Treasury Note, National Bank Note, and Federal Reserve Bank Note Series. The United States Note was the last series to offer the historic examples of the $2 bill when it was discontinued in 1966. The modern Federal Reserve Note Series reintroduced the $2 denomination in 1976.

All of the $2 Colorized Legal Tender Notes offered in this listing come with protective displays and a Certificate of Authenticity from the mint that enhanced the notes. These are legal tender notes that have been altered and enhanced visually with the unique application of colorization to portions of both the obverse and reverse design fields. Each one was removed from an uncirculated, sealed pack of Federal Reserve Notes, with each note clean and crisp.

On the obverse face of $2 Colorized Legal Tender Notes is a depiction of President Thomas Jefferson. The 3rd President of the United States of America, President Jefferson was responsible for doubling the size of the nation with his purchase of the Louisiana Territory from Napoleon Bonaparte’s French Empire. This visual element was introduced in 1928 on the new small-sized format of the United States Note and revived in 1976 when the $2 Federal Reserve Note was introduced.

The reverse field of $2 Colorized Legal Tender Notes comes with a replication of John Trumbull’s 1818 oil painting that captured the signing of the Declaration of Independence. When the $2 Federal Reserve Note was introduced in 1976, many Americans believed the choice of an elaborate design on the reverse of the $2 bill was the result of Bicentennial celebrations that year, and therefore assumed the release of $2 bills was merely commemorative in nature.

Please feel free to reach out to Silver.com with any questions that you might have about these legal tender notes. You can call us at 888-989-7223, chat with us live online, or email us directly.