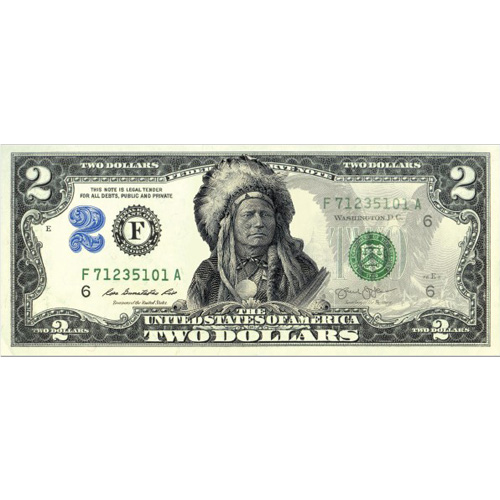 The $2 bill is the least circulated Federal Reserve Note in the United States today. Issued with an effigy of President Thomas Jefferson since 1928 and available as a Federal Reserve Note denomination since 1976, the $2 bill is so little used that many people still believe it is not a legitimate form of US paper currency. Today, $2 Native American Legal Tender Notes are available to you online at Silver.com.

All of these $2 Native American Legal Tender Notes are available to you for purchase today with an included Certificate of Authenticity detailing the design and authenticating the status of these $2 bills as legitimate US legal tender. The notes have colorized impressions on the obverse that replace President Thomas Jefferson with an image of Running Antelope, the first indigenous figure to ever feature on American paper money. Each $2 note comes in a bi-fold folio that houses the $2 bill on one side and the Certificate of Authenticity on the other.

Running Antelope is depicted at the center of the $2 Native American Legal Tender Notes. Born near what is now Grand River, South Dakota, in 1821, Running Antelope would go on to become the chief of the Hunkpapa tribe in 1851. The tribe was one of the seven tribes of the Lakota nation. He became the first, and to date only, indigenous figure to feature on American paper money when, in 1899, his likeness was put on the 1899 $5 Silver Certificate.

The Declaration of Independence signing ceremony is found in the reverse design of the $2 Native American Legal Tender Note. This design made its debut on the US $2 Bill in 1976 when the Federal Reserve Note series was introduced in this denomination. The design is based on an 1818 portrait created by John Trumbull based on the moment when the Founding Fathers signed the Declaration of Independence.

Please contact Silver.com with any questions about these legal tender notes. You can call us at 888-989-7223, chat with us live online, or email us directly.