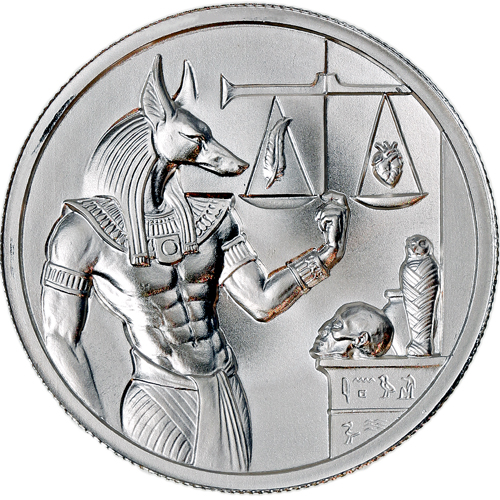 The Egyptian god Anubis was first depicted in the ancient empire with the image of a jackal in hieroglyphs, giving rise to the depiction of the god as a half-man, half-dog being. The name that the world knows Anubis by today is actually of Greek origin and resulted from the Ptolemaic rule of Egypt just prior to the Roman Empire conquering the region. Right now, the 2 oz Silver Elemetal Egyptian Gods Series Anubis Round is available for purchase on Silver.com.

Anubis has long been associated with death and the afterlife in Egyptian culture. During the First Dynasty more than five thousand years ago, Anubis was viewed as the protector of graves and an embalmer of bodies. He played a critical role in determining who would go on to the afterlife and who would be denied that glory following death.

The scales of justice were used by Anubis during the embalming ceremony. He would weigh the heart of a newly deceased human against a feather. If the heart was lighter than the feather, the individual would go to the afterlife. If not, there were doomed to an eternity in purgatory.

On the obverse of the round you’ll find the image of Anubis, depicted in the traditional half-man, half-dog imagery that the god was believed to take on. He is featured holding the scales of justice in one hand.

The reverse side of the 2 oz Silver Elemetal Egyptian Gods Series Anubis Round features a winged sun disc with a jackal seated upon it. Other images featured include that of a pyramid similar to those found in the complex of pyramids in Giza.

Elemetal Mint is the newest private mint in the United States, having formally established itself in July 2015 with the rebranding of the Ohio Precious Metals facility in southeastern Ohio. The mint is a collaborative effort between Ohio Precious Metals, NTR Metals, and Provident Metals.

If you have any questions, please feel free to reach out to Silver.com. You can reach our customer service team on the phone at 888-989-7223, connect with us online through our live web chat, or email us directly.