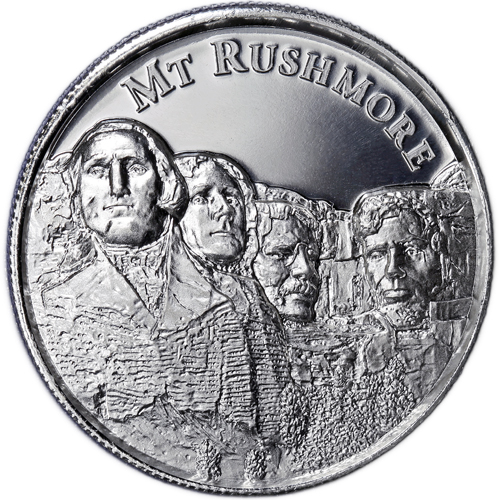 Any quantity available for $16.09 per oz over spot!

The Elemetal Mint might be a young facility in name, but it is backed by decades of experience in the industry and produces silver round programs to prove its heritage. The American Landmark Series is one of the first from Elemetal Mint, combining stunning designs with ultra-high relief rounds for an amazing, must-have silver product. Today, Silver.com offers the 2 oz Silver Elemetal Mount Rushmore Ultra High Relief Round for sale.

Mount Rushmore National Memorial is one of the most unique in the American landscape. Go to the Black Hills of South Dakota, just outside Rapid City, and you’ll find four 60-foot sculptures carved into the granite rockface on a southeastern slope. The memorial to four of the nation’s greatest presidents required 400 workers and attracts in excess of 2 million visitors annually.

Presidents George Washington, Thomas Jefferson, Theodore Roosevelt, and Abraham Lincoln were chosen for the memorial due to their contributions to the republic in their era. Washington, of course, led the fight to found the nation, while Jefferson completed its single greatest expansion with the Louisiana Purchase.

Roosevelt was a hard-nosed monopoly buster and launched the expansion of America as a superpower with his Great White Fleet. Lincoln did no less than save the Union itself by leading the US to victory with stoic grace during the Civil War.

On the obverse side of each 2 oz Silver Elemetal Mount Rushmore Ultra High Relief Round is a design reflecting the memorial sculptures found at Mount Rushmore in South Dakota. Engravings include only “Mt. Rushmore” at the top.

The reverse of each American Landmark Series silver round includes the geographic map of the North American continent, with particular focus on the United States. Engravings on this face include “American Landmarks” and “2 oz .999 Fine Silver.”

Elemetal Mint is the new brand identity for Ohio Precious Metals. Together with NTR Metals and Provident Metals, OPM launched the Elemetal Refining initiative in late 2014, implementing its goal in full in 2015.

Please direct your questions to Silver.com associates at 888-989-7223, chat with us live online, or reach out to us via email.

Design: The Mount Rushmore, part of the American Landmark Series