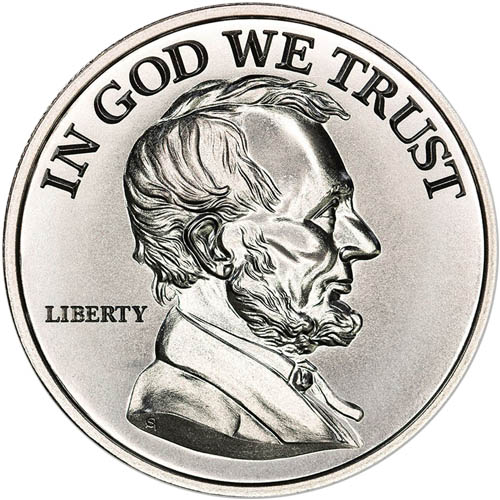 The image of Abraham Lincoln is about as popular and longstanding on American currency as that of President George Washington. The 1st and 16th presidents were separated by nearly a century in office, but fulfilled equally important roles for the United States of America. The 2 oz Silver Abraham Lincoln Eagle Round is now available to you online for purchase at Silver.com.

Lincoln grew up in the frontiers of western Kentucky and Indiana as a child. A self-educated man, he eventually moved to Illinois and formed his own legal practice. His first stint in politics came as an elected official in the Illinois House of Representatives. In 1846, he went to Washington DC as a member of the US House of Representatives from Illinois.

War and modernization in America would dominate Lincoln’s political life. As a US Representative, he pushed for the modernization of the US economy and stood in opposition to the Mexican-American War. As President of the United States, he would use the North’s modern, industrialized economy to outspend the South and suffocate the Confederacy. As President, he was saddled with a war that split the nation in two.

On the obverse of the Silver Abraham Lincoln Eagle Round is the image of the 16th President of the United States. Captured in right-profile relief, this is the same image you find on the circulation penny today. It includes engravings of the word “Liberty” and the nation’s motto. As president, Lincoln used his oratory skills to deliver numerous speeches to get the American people on his side during the Civil War.

Most famous among these was the Gettysburg Address, in which he espoused views on nationalism, republicanism, equal rights, liberty, and democracy. During the war, he managed to avert British intervention on behalf of the South, blockaded the Confederacy from the sea with the US Navy, and pushed the 13th amendment to the US Constitution through Congress to outlaw slavery.

The reverse of the 2 oz Silver Abraham Lincoln Eagle Round features the heraldic eagle. This classic design of the eagle includes an American bald eagle on a rocky outcrop with the national heraldic shield and an olive branch in its clutches with one talon, while the other rests on the ground clutching the arrows of war.

We encourage Silver.com customers to contact us about silver for sale at 888-989-7223. You can also chat with us live online or email us directly.