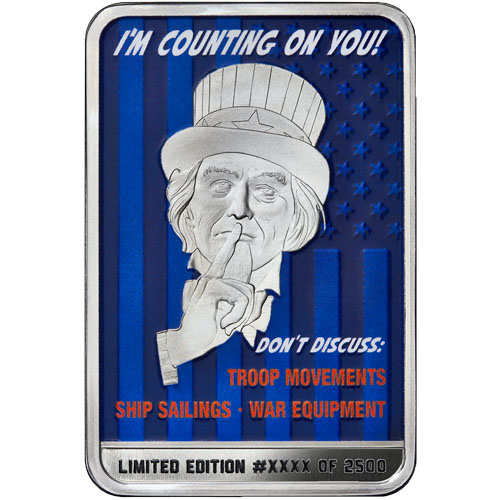 Propaganda posters were ubiquitous in the United States throughout World War II. One couldn’t walk into a school, post office, government facility, or business without seeing one of the more than 200,000 different posters designed during the war. Now, 2 oz Silver I’m Counting on You Bars are available to purchase online at Silver.com as part of the Fight For Freedom’s Sake Series.

Artists across the United States volunteered their time and skills to the Office of War Information during World War II to help in the creation of propaganda posters. These posters filled a variety of niches and helped to both disseminate information about the war, as well as control propaganda to help ensure continued support on the home front for the war effort.

Among the most common designs you would find on a propaganda poster during World War II was that of Uncle Sam. The origins of Uncle Sam date as far back as the American Revolution when an “uncle Sam” character was mentioned in the original lyrics from “Yankee Doodle” in 1775. A more formal origin comes from the War of 1812. As a personification of the federal government, Uncle Sam came into being in his present form during World War I as the government sought to boost enlistment and build support for joining the war effort in Europe.

The obverse field of 2 oz Silver I’m Counting on You Bars includes a combination of colorized fields and fine silver finishes. In the foreground, you see Uncle Sam with his trademark skinny beard on the chin as he raises a finger to his lips asking Americans not to discuss troop movements, ship sailings, and war equipment. An inscription above notes that “I’m Counting on You!,” with his covered lips indicating he needs America’s help in keeping secrets safe from the enemy.

On the reverse side of the 2 oz Silver I’m Counting on You Bar, the design depicts American soldiers in the thick of the fight in World War II. In the design field, one soldier stands up and fires from his Tommy Gun to support the advance of two of his fellow soldiers.

These 2 oz Silver I’m Counting on Your Bars come with individual acrylic capsules and a numbered Certificate of Authenticity. Each bar has its own serial number engraved on the obverse field.

We encourage Silver.com customers to call us with questions about silver for sale at 888-989-7223. You can also chat with us live online or send us an email.