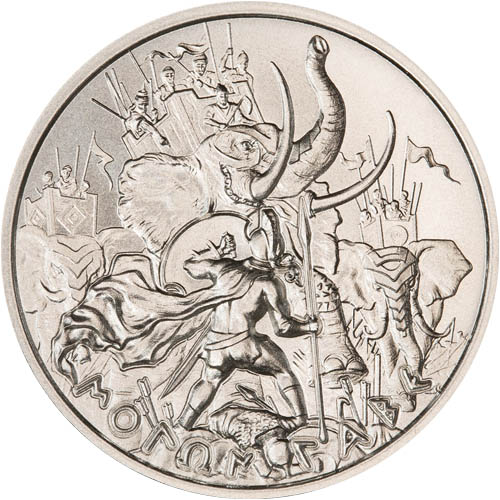 In the ancient world, there was no greater display of bravado than to brazenly tell an overwhelming force “molon labe.” This ancient Greek saying dates to the Battle of Thermopylae when Sparta’s King Leonidas refused to surrender to the invading Persian Army. Rather than willingly put down his weapons, he challenged the Persians to “come and take them.” Today, 1 oz Silver Molon Labe Rounds are available to you online at Silver.com.

The modern world’s knowledge of King Leonidas was spurred on by the successful feature film 300. The movie offered a theatrical depiction of the Battle of Thermopylae where 300 elite Spartan warriors teamed with an army of 7,000 Greek soldiers to try and slow a Persian Army invasion of Greece that included up to 150,000 soldiers.

All 2 oz Silver Molon Labe Rounds in this product listing are available to you in Brilliant Uncirculated condition. The silver rounds listed here are offered individually inside of protective plastic flips and as a bulk option within mint tubes of 10 rounds. In addition to the BU version of this design, Intaglio Mint offers these rounds with an antique polish as well.

The obverse side of the 2 oz Silver Molon Labe Round offers the fourth design in this series. On this side of the round, a Spartan warrior stands up amidst the devastation of the Battle of Thermopylae to take aim with a spear at one of the Persian war elephants bearing down in the Greek lines.

Ancient accounts of this battle suggested the Persian Army numbered one million men, but modern scholars believe a more accurate number was 150,000. Still, an army of 7,000 fought bravely for three days to delay the oncoming Persian force and give the rest of Greek time to gather its defensive forces back in the independent city-states. King Leonidas and his men were prime examples of the determination and bravery it took to challenge an overwhelming force and stand, for a while, on their own against the onslaught.

On the reverse side of all 2 oz Silver Molon Labe Rounds is a depiction of the Intaglio Mint logo. It is featured in the very center with a radial sunburst forming the background design element. Around the outer edge of the design field, there is a hammered finish behind inscriptions of “Two Troy Ounces” and “.999 Fine Silver.”

Please feel free to reach out to Silver.com with questions. You can call us at 888-989-7223, chat with us live online, or email us directly.