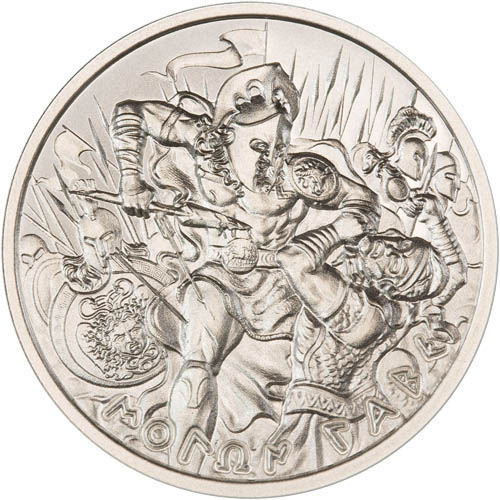 In 480 BC, a three-day battle took place that changed the course of history in Ancient Greece and would go down in the history of human civilization as one of the most valiant sacrifices. 300 Spartan warriors led a force to meet an overwhelming Persian Army and would eventually fight to the last man to ensure the security of broader Greece. The 2 oz Silver Molon Labe Round is now available to you for purchase online at Silver.com.

The Battle of Thermopylae has had a lasting effect on humanity. Not only did the battle’s outcome eventually benefit the Greek city-states, but it led to the rise of one of the most infamous lines of the ancient world: “molon labe.” Roughly translated into English, this phrase means “having come, take.” It has been colloquially translated though as “come and take them.”

That phrase has become a battle cry used throughout the following two thousand years of human history. King Leonidas of Sparta led his elite Spartan warriors as the spearhead of the 7,000-man army hoping to stall the advance of the 150,000-man Persian Army. Before the outset of action, King Xerxes of Persia offered Leonidas the opportunity to surrender and live. Even facing overwhelming numbers, Leonidas famously told the Persian king his men were holding their weapons and if he wanted them, he could try to come and take them.

On the obverse of 2 oz Silver Molon Labe Rounds, a powerful Spartan warrior emerges to take the battle to the Persians even though he has been wounded by two arrow strikes to his thigh. The Spartans’ ability to delay the Persians for seven days has gone down in history as a symbol of the power a patriotic army defending its native land can wield. It also showcased the force multiplier that superior training, equipment, and use of terrain can deliver.

The reverse of 2 oz Silver Molon Labe Rounds comes with the Intaglio Mint seal. In the center is the “I” seal of the mint with a radial sunburst background design element. The outer design field has a hammered finish with the weight, purity, metal content, and name of the mint inscribed within.

We encourage Silver.com customers to call us at 888-989-7223 with questions about buying silver. You can also connect to us online through our live chat and email address options.