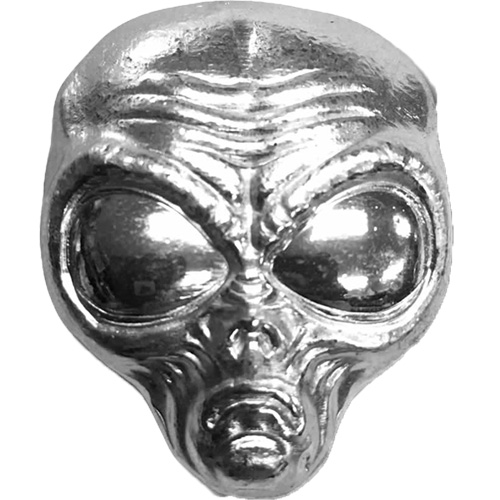 Mankind has always had a fascination with that which lies beyond the bounds of Earth. For thousands of years, humanity could only gaze up at the Moon, Sun, and stars in wonderment. It wasn’t until the second half of the 20th century that we had any idea what was really going on outside the reach of Earth. One of the most captivating concepts is the presence of other life in the universe. Now, 2 oz Silver Monarch 3D Alien Heads are available to you for purchase online at Silver.com.

Arguably the most important advancements in humanity’s knowledge of the universe came in the second half of the 20th century. As the US and Soviet Union both pushed through the Space Race and developed more advanced weapons systems during the Cold War, the number of sightings of UFOs increased.

One of the most famous was the crash of an unknown craft near Roswell, New Mexico, in the 1950s. Since that time, countless Americans and others around the globe have reported encounters with beings from another race, and indeed, from another planet. Though there are always variations in the descriptions, there are also many commonalities. Among those, the shape of an alien’s head.

On the obverse of the 2 oz Silver Monarch 3D Alien Heads is a depiction of a common alien head. Many individuals have reported aliens having tall, thin bodies with large heads. Those heads often expand significantly from the mouth upward, as a tiny jaw and mouth give way to large, lifeless eyes and huge craniums. These features are captured perfectly in the 3D design of these silver alien skulls. The most unique aspect of this field is the highly polished finish on the eyes, setting them apart visually from other elements.

These 2 oz silver Monarch 3D Alien Heads are available to you brand new from Monarch and come with distinctive storage pouches. The bright-green pouch has black drawstrings and depictions in black on the bag of an alien craft.

Silver.com customer service is available to assist you with questions about silver for sale at 888-989-7223. We are also available online through our live chat and email address features.