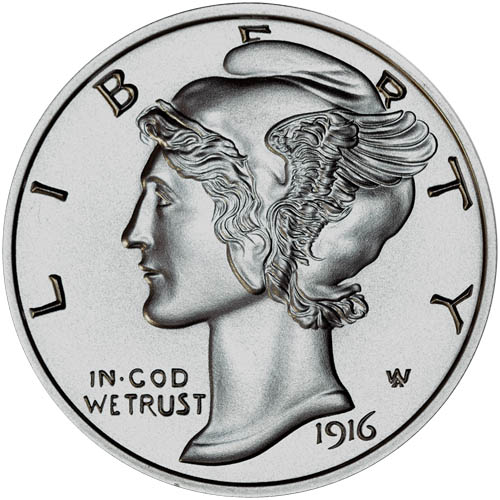 One of the most coveted coin designs among collectors who seek out American circulation currency is the Mercury Dime. Officially struck as the Winged Liberty Dime, the American public came up with their own name for this unique depiction of Liberty that has stuck with the coin more forcefully over the course of time. The 2 oz Silver Winged Liberty Mercury Dime is available online for you to purchase today at Silver.com.

Each of the silver rounds for sale in this listing comes from the Intaglio Mint, a relative newcomer in the precious metals industry. The primary design for the obverse is borrowed from American history, while Intaglio CEO Mark Bogani created the design found on the reverse of each round.

The Mercury Dime, as it was popularly called, replaced the Barber Coinage available in the United States from 1892 until the mid-1910s. Adolph A. Weinman emerged victorious in art contests for two new national currency designs in 1916. His Walking Liberty graced the 50-cent piece and lives on today on the American Silver Eagle.

His Mercury Dime piece was actually known as the Winged Liberty Dime. On the obverse of these 2 oz Silver Winged Liberty Mercury Dime Rounds you’ll find the left-profile portrait of Liberty. She wears a Phrygian cap with wings on it that reminded 20th century Americans of the Roman messenger god Mercury, hence the common usage of Mercury Dime when referring to the coin.

Engravings on this face of the round include “Liberty,” the American national motto of “In God We Trust,” the year of issue of the first Mercury Dimes (1916), and the initials of Weinman featured as “AW.” Weinman’s Winged Liberty design lived on as the dime’s primary design until 1946 when it was replaced by the effigy of the recently deceased President Franklin D. Roosevelt.

The reverse of the 2 oz Silver Winged Liberty Mercury Dime features a creation from mint CEO Mark Bogani. He created a new take on the American heraldic eagle, this time creating a lively impression of the national bird as it unfurls a banner that reads “God Bless America.” An engraving around the outer rim of the design fields reads “Home of the Free” at the top and “Because of the Brave” at the bottom.

We encourage Silver.com customers to call us at 888-989-7223 with questions. You can also reach out to us online using our live chat and email features.