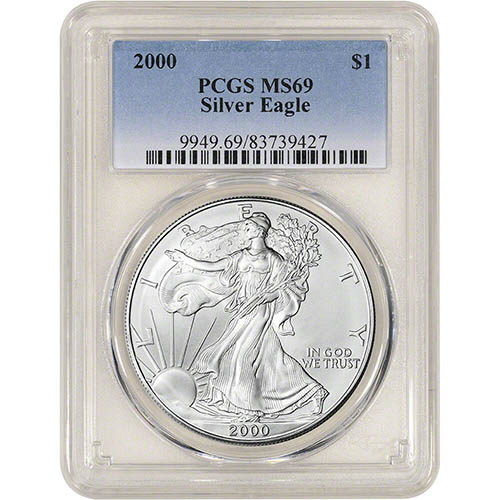 The 2000 issue of the Silver Eagle bullion coin from the United States Mint brought further growth to the program. The demand for silver for sale was rising amidst the confusion surrounding Y2K, which was aided by cooling stock markets in the US as the Dotcom bubble burst around the same time. Today, 2000 1 oz Silver American Eagle Coins are available to you online at Silver.com with a PCGS certification.

Another significant factor regarding the Silver American Eagle in 2000 was its place of production. All Silver Eagles were struck by the San Francisco Mint from 1986 to 1998. In 1999 and 2000, the Philadelphia Mint briefly handled production of the bullion coins, making these the last ones produced by the Philadelphia Mint. Since 2001, all silver bullion American Eagles have been struck at the West Point Mint.

All 2000 1 oz Silver American Eagle Coins are available to you here today with a Mint State 69 certification. Considered near-perfect coins, these specimens have full, original mint luster and no more than two minor detracting flaws. Examples of acceptable flaws include only minuscule contact marks and hairlines.

The obverse of 2000 Silver American Eagles includes the iconic Walking Liberty design. This image was created in 1916 by Adolph A. Weinman and features Liberty walking toward the sun on the horizon with the American flag draped over her shoulders.

On the reverse of 2000 1 oz Silver American Eagle Coins is the design of the heraldic eagle of the United States. This modern version of the seal was created in 1986 by John Mercanti for use on these coins and continues with the design elements of the American bald eagle behind the US national shield. An addition to this design is a cluster of 13 stars in a triangle above the bird.

Please don’t hesitate to reach out to Silver.com customer service with your questions. You can call us on the phone at 888-989-7223, chat with us live online, or email us directly with your inquiries.