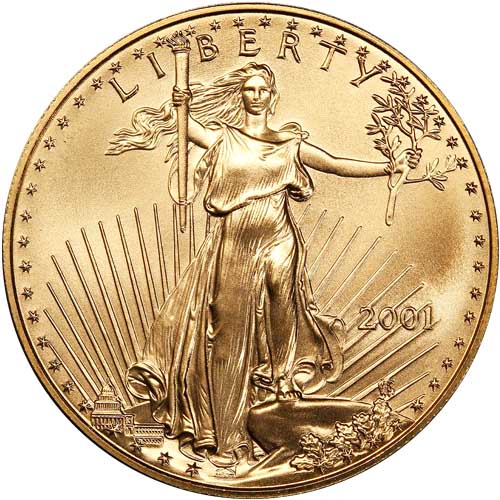 When it comes to buying gold from the United States Mint, the longest-running program is the Gold American Eagle. Though other gold options are available, the Gold Eagle is the official gold bullion coin of the United States and carries some of the nation’s most symbolic imagery on its design sets. Today, the 2001 1 oz Gold American Eagle Coin is available to you online at Silver.com.

Gold American Eagle coins were first released in 1986 by the US Mint with two versions available: bullion and proof. The coins are available in 1 oz, ½ oz, ¼ oz, and 1/10 oz weights. The bullion series launched with all four weights available the first year, but the proof coins were phased in over time from 1986 to 1988.

Your 2001 1 oz Gold American Eagle available today is in BU condition. Coins in BU condition have no signs of wear and tear, however you may find minor flaws on the coin ranging from breaks in the luster and spotted surfaces to contact marks resulting from the production process at the mint.

Mintage of the Gold American Eagle bullion coin again dropped in 2001, hitting what was then a production low of 143,605 coins. This figure still stands as the second lowest mintage of all time in the program, and marked a third consecutive year in which the 1/10 oz coin outsold the 1 oz option.

On the obverse of 2001 1 oz Gold American Eagle coins you’ll find Lady Liberty. This design appeared on the $20 Gold Double Eagle from 1907 to 1933 and was created by Augustus Saint-Gaudens. The famed artist and engraver was tapped by President Theodore Roosevelt personally in 1905 to lead a charge in refining American coin design.

The reverse of Gold American Eagle coins feature a design used exclusively in this series. Created by Miley Busiek, an accomplished artist and engraver with public and private works, it features a male bald eagle flying over a nest in which a group of hatchlings rests under the watchful eye of a female eagle.

Please feel free to contact Silver.com at 888-989-7223. You can also connect with us online using our live chat and email address.