Lunar Calendar coins are immensely popular with investors and collectors around the world. The rise of China in the political realm and greater awareness of its culture as native Chinese migrate around the globe has led to increased prominence for the animals of the Zodiac in coin design. You can now buy a coin from the wildly popular Lunar Series I by purchasing a 2001 1 oz Gold Australian Snake Coin.

In the lore of ancient China, the Jade Emperor called a meeting of all the world’s animals. Though numerous creatures raced to meet him, only 12 animals ever arrived to meet with the emperor. Those that did arrive were honored with a place in the Lunar Calendar, with each animal occupying a place in the cycle that corresponds to its arrival following the Great Race.

The Perth Mint of Australia first introduced the Lunar Series I coins in 1996 when it unveiled the Year of the Mouse coin. The original Lunar Series ran through 2007, at which point all 12 animals in the Zodiac had been represented. The 2001 Year of the Snake coin was the sixth coin in the series.

On the reverse side of the coin is the image of a snake. The serpent is depicted with its body wrapped around a tree branch. Engravings on this side of the coin include the year of minting, the weight, purity, and metal content of the coin, and the Mandarin Chinese symbol for snake.

The obverse features the standard image of Queen Elizabeth II, as created by Ian Rank-Broadley. Used on the obverse of all Australian currency, Her Majesty’s right-profile bust is shown surrounded by engravings that “Elizabeth II,” “Australia,” and the face value of the coin in AUD.

Australia’s Perth Mint is the oldest operating facility in the country, and is a holdover from the time of British rule. If you have questions about these coins, please contact a Silver.com associate at 888-989-7223. We’re also available online and via email. 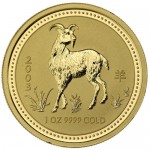