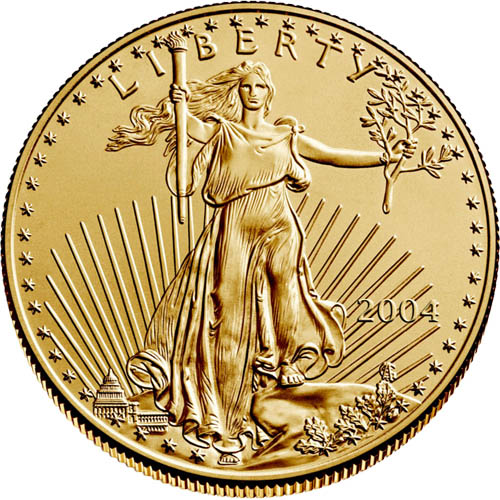 Gold American Eagle coins experienced modest gains in mintage across the board, with the exception of the ¼ oz option. The 1 oz coin saw an increase of just under 1,000 coins in production, while the ½ oz coin jumped the most, climbing almost 20,000. The ¼ oz coin dropped just over 2,000 in mintage and the 1/10 oz increased almost 5,000.

With the purchase of a 2004 1 oz Gold American Eagle today you receive a coin in BU condition. Coins in BU condition have no signs of wear and tear on the surface areas, however, you may notice minor flaws such as breaks in the luster, spotted surfaces, or contact marks from the production process.

Rising gold prices in 2004 helped sustain demand among investors for Gold Eagle bullion coins. Although gold briefly dipped below $400 per ounce, it enjoyed a steady climb throughout the second half of the year that allowed it to move from an opening price in January of $416.25 per ounce to close at $435.60 per ounce.

On the obverse of the Gold Eagle is Augustus Saint-Gaudens’ Liberty design. Used on the $20 Gold Double Eagle from 1907 to 1933, this was the first of many new American coin designs rolled out by the US Mint in the early 20th century as American coinage was modernized under numerous White House administrations.