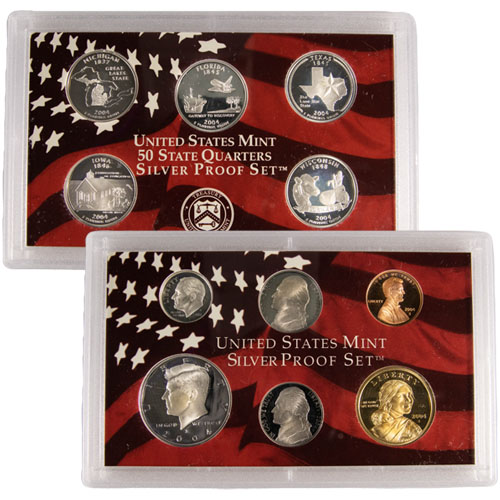 If you are looking for a new coin set to add to your growing collection, look no further than the 2004 Proof Silver US Mint Sets at Silver.com. These sets contain 11 coins that were all released from the United States Mint in the same year (2004 in this case) with special proof finishes. Get yours from Silver.com today!

The United States Mint is no stranger to coin sets. Every year, the mint releases various coin sets that feature only coins that were minted in that year. This particular set contains 11 coins that are all available in circulation, but these sets have an amazing proof finish that gives the coins a mirrorlike appearance. In addition to the finish, some of these coins also contain 90% silver. The United States government has given each of these coins a face value that allows them to be spent as currency.

Each set in this listing is used, and for this reason, we can’t guarantee that the original packaging like shipping sleeves and Certificates of Authenticity will all be included in your shipment. Additionally, if you do have these pieces of packaging in your order, they might show signs of wear and tear. All of the coins will be in good condition and ship in plastic coin holders; the coin holders might show signs of wear and tear.

This set includes a Lincoln cent, Roosevelt dime, Kennedy half dollar, and Sacagawea dollar. Additionally, the sets contain coins from two popular coin series from the United States Mint: Westward Journey nickels and Statehood quarters. Each coin was minted in 2004.

Five Statehood quarters are included in this set: Michigan, Florida, Texas, Iowa, and Wisconsin. Each of these coins was minted in 2004. Designs vary on these quarters. State quarter designs will include elements that are special to the state. For example, the Michigan quarter features the outline of Michigan and the phrase “Great Lakes State.”

The Statehood quarters series began in 1999 and ran for 10 years through 2008. Five new coins were released each year to honor another state. Coins were released in the order in which the states were ratified or admitted into the Union.

The two Westward Journey nickels are included in this coin set. The Louisiana Purchase (also called Peace Medal) and Keelboat were minted in 2004, when the series kicked off. The other two releases came out in 2005.

The customer service team at Silver.com is top-notch! Should you have any questions, please feel free to reach out to our superior team at 1-888-989-7223. You can also reach us via live chat and email.