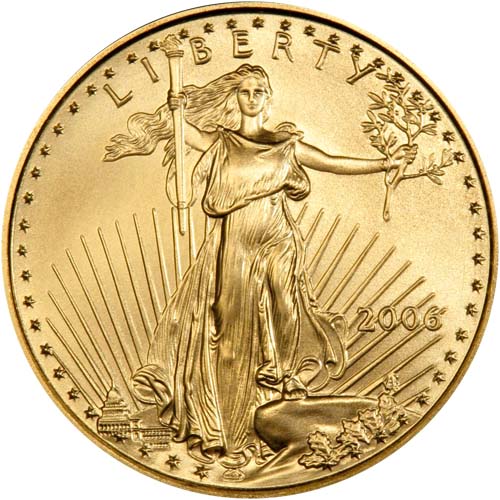 Gold American Eagle coin production continued to sputter during the mid-2000s despite gold prices mounting a sustained upward march during the first half of the first decade of the 21st century. The 2006 issue of the coins marks one of the lowest mintage years in program history, and right now the 2006 1 oz Gold American Eagle Coin is available for purchase online at Silver.com.

Each 2006 1 oz Gold American Eagle offered to you here today is in BU condition. Coins in BU condition exhibit no signs of wear and tear. However, minor flaws such as breaks in the luster, spotted surfaces, and contact marks from the coining process are possible.

Gold American Eagle coinage spent most of the early 2000s plummeting downward from the all-time highs reached in 1998 and 1999. The 2006 release of the coins marked a second straight year of declines, ranking as the sixth-lowest mintage to date in the program’s history. 2006 also marked yet another year in which the 1/10 oz coin outsold the 1 oz.

The reverse of the 2006 1 oz Gold American Eagle Coin includes the bald eagle family design from Miley Busiek. Created in 1986 exclusively for the Gold Eagle coin series, it depicts a family nest with hatchlings under the guard of a female as the male flies overhead.

On the obverse of all Gold American Eagle coins you’ll find America’s greatest coin design ever. The Liberty design created in 1907 by Augustus Saint-Gaudens stands the test of time as the most beloved image of Liberty on an American coin, and originally appeared on the $20 Gold Double Eagle from 1907 to 1933.

2006 was significant in a number of other ways for the United States Mint. The 24-karat Gold American Buffalo debuted, the Gold Eagle series gained the uncirculated version, and the price of gold surged further upward. Gold opened the year around $530 per ounce, spiked briefly above $700 per ounce, and closed the year at $632.00 per ounce.

If you have any questions, please feel free to contact Silver.com. Our customer service associates are available on the phone at 888-989-7223, on the web using our live chat, and via our email address.