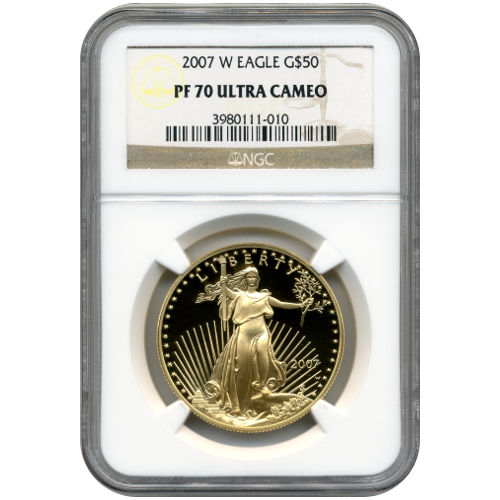 As the Great Recession settled in around the globe in late 2007, the demand for gold and prices began to skyrocket. The Proof Gold American Eagle and other versions of the Gold Eagle benefited as a result, with all four coins experiencing significant surges in mintage. The 2007 1 oz Proof Gold American Eagle Coin is currently available to you online at Silver.com with a perfect certification.

Even though the 2006 issue of the Proof Gold American Eagles featured commemorative 20th-anniversary options that included the 1 oz gold coin, demand for the 1 oz coin managed to surge again in 2007. The 1 oz coin jumped by nearly 4,700 coins from the 2006 release to settle with the second-highest mintage behind only the 1/10 oz coin.

All four of the weights available in the 2007 Proof Gold American Eagle coin had individual mintage caps and were also available in a 4-Coin Proof Gold Eagle Set. Despite rising gold demand and prices though, none of them sold out entirely. Gold skyrocketed in 2007 to finish $200 higher per ounce than it opened the year, closing at $833.75 per ounce. Most of that came late in the year as the Great Recession began.

The obverse face of 2007 Proof Gold American Eagle Coins features the design of Lady Liberty as she strides forward into the future. She is a guiding force for the nation with a large torch in her right hand and an olive branch in her left.

On the reverse side of the 2007 1 oz Proof Gold American Eagle Coin is the design of American bald eagles. Created by Miley Busiek, the design features a family nest with a hatchling within under the care of a female eagle while the male eagle is shown flying overhead.