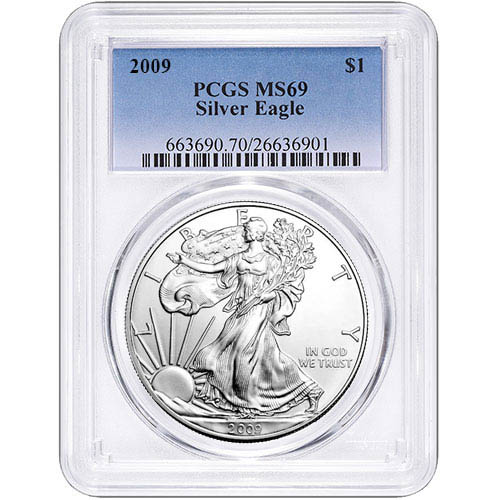 From one record-breaking year to another, the 2009 Silver Eagle’s release brought with it the first-ever back-to-back record sales in the Silver American Eagle bullion range. After increasing by more than 11.5 million in demand from 2007 to 2008, Silver Eagle sales jumped another 10 million in 2009. Today, 2009 1 oz Silver American Eagle Coins are available to you online at Silver.com with a PCGS certification.

The demand for Silver American Eagle coins skyrocketed during the Great Recession (2008-2010), but even after the economy began to improve beginning in 2011 the Silver Eagle still pushed to new record sales marks in a number of years. The 2009 1 oz Silver Eagle had a then-record mintage of 30,459,000 coins.

All 2009 1 oz Silver American Eagle Coins listed here are in Mint State 69 condition. The PCGS assigns this grade to coins with full, original mint luster and no more than two minor detracting flaws. Those flaws are limited to minuscule contact marks or hairlines.

2009 was a significant year on a number of fronts for silver bullion. First, there was the record-breaking mintage of the bullion Silver Eagle. Then, the demand for silver was so high that the US Mint suspended both the Proof Silver Eagle and Burnished Silver Eagle in 2009. Silver prices also showed strength in 2009. The overall average was up to $14.67 per ounce, with trading experiencing wild swings from prices as low as $10.51 per ounce to as high as $19.18 per ounce.

On the obverse of all Silver American Eagle coins is the design of Walking Liberty. Created by Adolph A. Weinman, it debuted on the half-dollar coin in 1916 and featured on that specimen until 1947.

Please feel free to contact us with questions when you buy silver. You can call Silver.com customer service at 888-989-7223, chat with us live online, or simply email us.