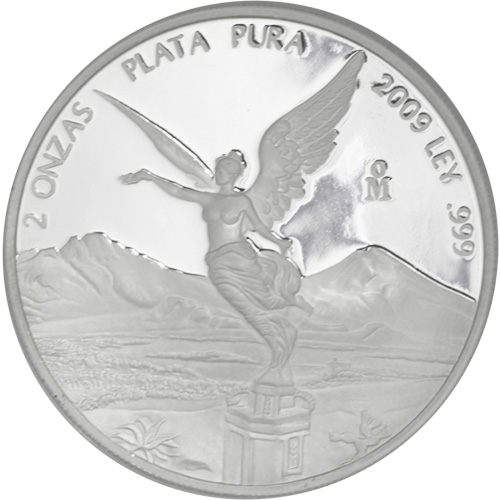 The Mexican Libertad Series from the Mexican Mint is one of the most coveted in North America. It stands equal alongside the Maple Leaf and American Eagle bullion coins available to investors, with collectible coins available across all of these collections. However, the Silver Libertad stands out as the most diverse with its eight BU weights and seven proof weights. Now, 2009 2 oz Proof Silver Mexican Libertads are available to you for purchase online at Silver.com.

Mexican Libertad Coins are like many other bullion coin collections in a variety of ways. For example, like its counterparts from the Royal Canadian Mint and the United States Mint, the Mexican Libertad coins have the same obverse and reverse design elements each year. The only difference comes between the 1 oz and larger coins and the fractional-ounce coins. While all coins have the modern Mexican coat of arms, only the 1 oz and larger coins have a ring of 10 historic versions of the seal as well.

At the same time, the Mexican Libertad coins are unlike the majority of the world’s bullion coin collections in some significant ways. The most noticeable of these differences is one that puts the coin on-par with the Gold Krugerrand. While the Mexican Libertad coins are legal tender in Mexico, none of the weights are assigned a specific face value.

On the obverse of the 2009 2 oz Proof Silver Mexican Libertad Coins is a depiction of Winged Victory. This depiction of Victory is based on the statue that stands at the top of the Mexican Independence Victory Column. The column and statue mark the centennial of Mexico’s independence. While the column was erected in 1921 to mark the 100th anniversary of the end of the war, Winged Victory’s statue was actually made more than a decade earlier in 1910 to mark the start of the conflict.

The reverse face of 2009 2 oz Proof Silver Libertads comes with the modern coat of arms for Mexico in the center. This design element is surrounded by 10 historic versions of the seal that represent the history of Mexico both before and after Spanish colonization.

These 2009 2 oz Proof Silver Mexican Libertads are available to you with protective acrylic capsules. The coins have frosted designs with mirrored fields and have a limited mintage. There were only 6,200 silver coins issued in this proof release in 2009.

Silver.com customer service is available to answer your questions about silver for sale at 888-989-7223. We are also available on the web using our live chat and email address.