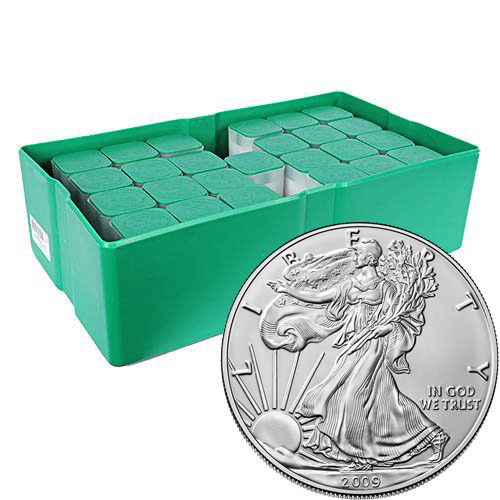 When you buy the silver coins of the Silver American Eagle Series from the United States Mint, the coins come direct from the mint to authorized dealers in bulk packaging options. While investors can purchase the individual coins from dealers inside of protective plastic flips, you can still purchase the coin in bulk from dealers. The largest bulk option is the Monster Box of 500 silver coins. Today, 2009 Silver American Eagle Monster Boxes are available to you online at Silver.com.

Silver American Eagles debuted from the United States Mint in 1986 with 1 oz silver coins issued in a Brilliant Uncirculated and Proof version. In 2006, the series added a Burnished version as an alternative collectible option alongside the proof coins. Since 1986, there have only been three missed releases in total across the series. The 2009 Proof Silver Eagle was not issued amidst then-unprecedented demand for the coins. The 2009 and 2010 Burnished Silver Eagles were not issued for the same reason. However, the BU Silver Eagles have been issued every year.

All of the 2009 Silver American Eagle Monster Boxes available here come with a total of 500 individual silver coins from the 2009 Silver Eagle release. The United States Mint Monster Box is a large, green box with a green lid bearing the logo of the United States Mint. Inside the box, there is a total of 25 individual clear, acrylic tubes with green lids also bearing the US Mint logo that house 20 coins per tube.

Walking Liberty is found on the obverse of 2009 Silver Eagles. The image of Walking Liberty was created by Adolph A. Weinman in 1916. The left-profile depiction of Liberty showcases her figure walking toward the sun on the horizon. She carries the branches of oak and laurel in her left hand to represent the civic and military prowess of the United States. The American flag is draped around her figure as she extends her right hand toward the sun.

For the reverse side of 2009 Silver American Eagles, the US Mint features the heraldic eagle of the United States. The heraldic eagle was first created in 1792 as an emblem of the US government and first used on American coins in 1794. It has been modernized several times throughout American history, with this design coming from John Mercanti in 1986.

Please contact Silver.com if you have any questions. Our customer service team is available at 888-989-7223, online using our live chat, and through our email address.