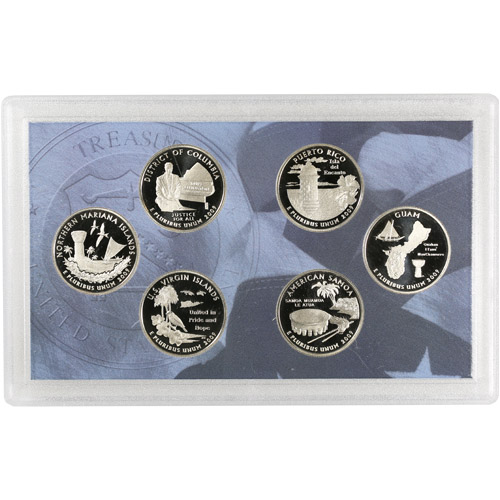 In 2009, the United States Mint extended its popular State Quarters circulation series with the introduction of six final designs. After featuring each of the 50 US states from 1999 to 2008, the mint represented the District of Columbia and all five overseas territories in a six-coin release. Today, 2009 US Mint Proof Quarters Sets are available to you online at Silver.com.

From 1999 to 2008, the US Mint celebrated each of the 50 states in the Union with distinctive reverse designs. Five new designs were issued each year in the circulation series, with the states featured based on their position from first to 50th in admission to the Union. For the first several states in the series, it was based on those former colonies ratifying the new United States Constitution in the late-18th century. The popularity of this circulation series led to the 2009 release of the District of Columbia and United States Territories Quarters.

All of these 2009 US Mint Proof Quarter Sets come to you with a single plastic holder that contains six coins in all. Each coin is a standard, circulation blank with US quarter designs. However, these coins were struck in proof with frosted designs and mirrored fields, and were never circulated.

On the obverse of each coin in the 2009 US Mint Proof Quarters Set, you will find a depiction of President George Washington. This left-profile portrait was created in 1932 by John Flanagan and introduced that same year on the US quarter. The reverse of each quarter has a different design. The regions represented in the 2009 series included Washington D.C., Puerto Rico, Guam, the United States Virgin Islands, American Samoa, and the Northern Mariana Islands.

Please contact Silver.com if you have any questions. You can call us on the phone at 888-989-7223, chat with us live online, or email us directly.