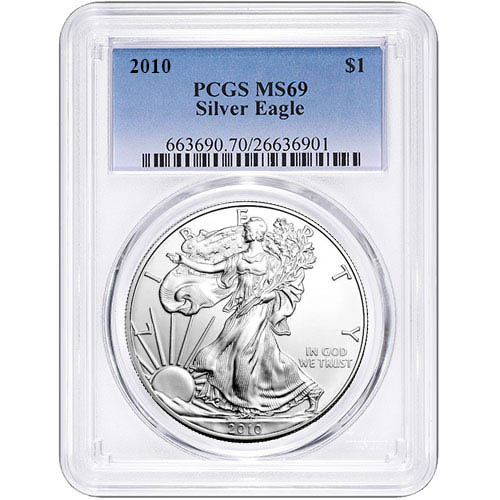 In a first for the Silver American Eagle, the 2010 release of the bullion version of the coin marked the third straight year in which a mintage record was set for the collection. After surpassing two records in the previous two years, growth was slower in 2010, but nonetheless dramatic as the Silver Eagle continued to climb higher. The 2010 1 oz Silver American Eagle Coin is currently available to you for purchase online at Silver.com in near-perfect condition.

The final declared mintage for the 2010 Silver American Eagle coin was 34,764,500 coins. In just four years, the Silver Eagle had gone from a mintage of 9.028 million coins to more than three times that figure at 34.764 million coins. This was the third consecutive year in which the Silver Eagle set a bullion sales record.

Silver prices also continued to climb in 2010 as the Great Recession hit some of its deepest points before economies began to slowly turn around in 2011. The market experienced significant highs and lows for a second year in a row, with silver trading as low as $15.14 per ounce and as high as $30.70 per ounce. For most of the year, silver traded in a tighter range between $15 and $20 per ounce. In September, it moved passed the $20 mark for good and steadily climbed the rest of the year.

On the obverse of 2010 Silver Eagles is the design of Walking Liberty. Created by Adolph A. Weinman in 1916, many people believe he fashioned this image of Liberty based on the French coin design known as “the sower.”

The reverse face of 2010 Silver American Eagle Coins includes the heraldic eagle of the United States. This seal includes an American bald eagle behind the US national shield with a triangular cluster of 13 stars above its head.

These 2010 1 oz Silver American Eagle Coins earned Mint State 69 certifications from the PCGS. Coins in this condition showcase full, original mint luster with no more than two minor detracting flaws. Examples of acceptable flaws at this level include minuscule contact marks or hairlines.

For assistance when purchasing silver at Silver.com, please contact our customer service team. You can reach out to us on the phone at 888-989-7223, connect with us online through our live chat, or email us.