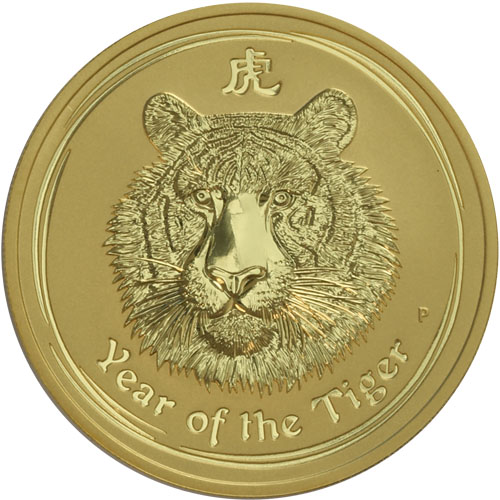 The gold bullion coins from the Lunar Series II collection far outpace any rivals in terms of design brilliance and available options. While investors in some other collections may find one or two weights at best, the Perth Mint offered its 2010 Gold Australian Tiger Coins in a total of 10 different gold weights. Right now, 2010 2 oz Gold Australian Lunar Tiger Coins are available to purchase online at Silver.com.

Each 2010 2 oz Gold Australian Lunar Tiger Coin in this product listing is available to you with a protective plastic flip. The coins in the Lunar Series II collection have set mintage caps for only two of the 10 weights offered. These include the 1 oz gold coin and the 10 Kilogram gold coin. All others have unlimited mintages that allow for coining through December of the calendar year matching the date mark on the coin.

The obverse of 2010 2 oz Gold Australian Lunar Tiger Coins includes the effigy of Her Majesty, Queen Elizabeth II. The longest-reigning British monarch features on this side of the coins in what is known as the fifth-generation Australian coin design boasting the monarch’s image. It was originally designed as the fourth-generation British coin effigy in 1998 by Ian Rank-Broadley and featured on Australian coins from 1998 to 2018.

On the reverse of 2010 Gold Australian Lunar Tiger Coins is a depiction of a tiger’s head. The largest predatory cat species in the world, the tiger is commonly found in northeastern China as part of the Siberian subspecies.

If you have any questions, please contact Silver.com. You can reach our customer service team on the phone at 888-989-7223, chat with us live online, or email us directly.