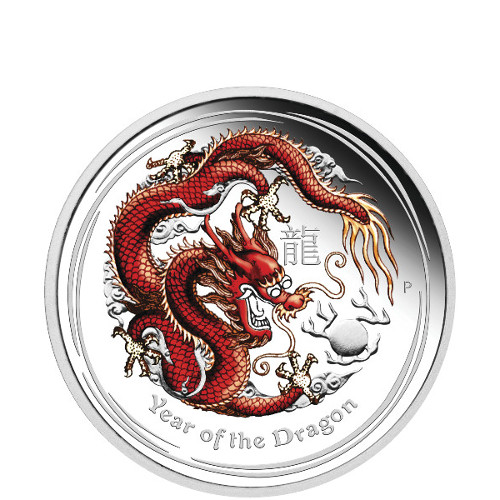 In 2012, the Year of the Dragon rolled around on the Chinese Lunar Calendar, and the Perth Mint was ready with another exiting release in its coveted Lunar Series II program. Available in gold and silver each year, with proof and bullion versions, these coins are highly sought-after. Right now, the 2012 ½ oz Proof Colorized Silver Australian Dragon Coin is available on Silver.com.

On the obverse side of each Silver Australian Dragon Lunar Series II coin you’ll find the commonly-used right-profile portrait of Queen Elizabeth II. Her Majesty’s image has appeared on British and commonwealth coinage since her 1952 ascension to the throne of England following her father’s death.

The reverse of all 2012 ½ oz Proof Colorized Silver Australian Dragon Coins is the image of a slithering dragon, captured in beautiful hues of red and yellow for the scales on its body, along with black outlines. Engravings read “Year of the Dragon,” and feature the “P” mint mark of the Perth Mint and Chinese symbol for dragon.

The Year of the Dragon occurs in 2012 and every 12th year going forward, and backward, in time. Those born under the sign of the dragon are said to be confident, enterprising, independent, self-assured, and brave. This is the second time the dragon has appeared on Perth Mint coinage, having previously appeared on the Lunar Series I coin for the Year of the Dragon release in that selection.

Located in Perth, Western Australia, the Perth Mint was originally the third and final facility constructed in the Royal Mint system in Australia. Following Australian federation, it remained under British control striking coinage for the continent. The Currency Act of 1965 gave Perth Mint coins legal tender status, but also established the new sovereign mint of independent Australia as the Royal Australian Mint in Canberra, the federal capital of the nation.

If you have any questions about these coins, please don’t hesitate to ask. A Silver.com associate is available to help you on the phone at 888-989-7223, online using our live web chat, or via our email address.