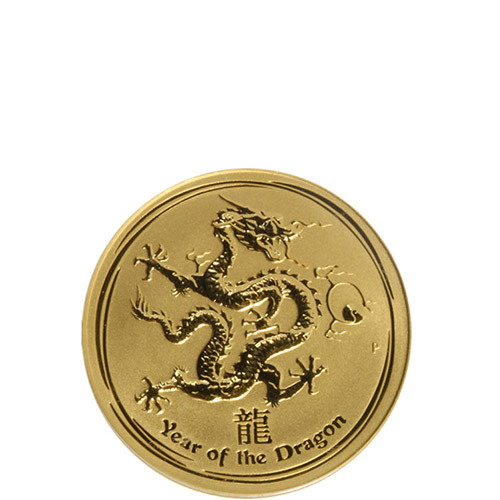 All 2012 1/4 oz Gold Australian Lunar Dragon Coins in this product listing are available to you with protective plastic flips. The Gold Lunar coins from the Perth Mint are available annually in 10 different weights. These include 10 kilogram, 1 kilogram, 10 oz, 2 oz, and 1 oz coins alongside four fractional-weight coins.

The reverse face of 2012 Gold Australian Lunar Dragon Coins includes a depiction of a dragon. The dragon is the most revered symbol from Chinese mythology and is said to have the ability to control the weather, particularly rain. Dragons in Chinese culture are depicted as snake-like creatures with four or six legs and no wings. This dragon winds its figure across the design field in pursuit of the flaming pearl.

Founded in 1899, the Perth Mint is the last of the three Royal Mint of England facilities established on the continent in the 19th century. Today, the Perth Mint is owned by the government of Western Australia and its coinage is recognized as official legal tender currency.

Please feel free to reach out to Silver.com with your questions about gold for sale. You can call us on the phone at 888-989-7223, chat with us live online, or simply email us.