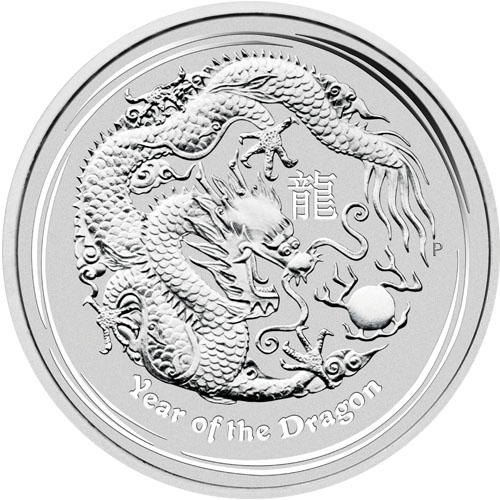 The fifth of 12 designs in the Lunar Series II program at the Perth Mint represents the Year of the Dragon. The design featured on the reverse of the silver coins for sale in this release showcases a powerful dragon as it pursues the flaming pearl, a well-known symbol of wisdom. Right now, 2012 10 oz Silver Australian Lunar Dragon Coins are available to purchase online at Silver.com.

Each 2012 10 oz Silver Australian Lunar Dragon available through this product listing is housed inside of an individual plastic capsule. These coins are the fifth from the 12-year cycle of the Lunar Series II collection. With Ten Troy ounces of pure silver content, these coins are the third-largest in the release behind the 10 kilogram and 1 kilogram silver coins.

The obverse side of 2012 10 oz Silver Australian Lunar Dragons features a right-profile bust of Queen Elizabeth II. In this design, Her Majesty is depicted with the Girls of Great Britain and Ireland Tiara on her head. The image was created by Ian Rank-Broadley for the Royal Mint of England in 1998 and featured on British coins, as well as other British currency. This design was the obverse image of choice for all Lunar Series I coins from 1999 to 2007 and all coins in the Lunar Series II program.

On the reverse side of the 2012 Silver Australian Lunar Dragons is the design of a dragon pursuing a flaming pearl. The flaming pearl is viewed in Chinese culture as a symbol of wisdom. Depicting the dragon in pursuit of this symbol indicates that the dragon has a desire for wisdom and knowledge. The dragon design featured here depicts a slithering dragon on all fours crawling around the design element in pursuit of that pearl.

If you have any questions, Silver.com customer service will be happy to help. We are available to you on the phone at 888-989-7223, on the web using our live chat, and via our email address.