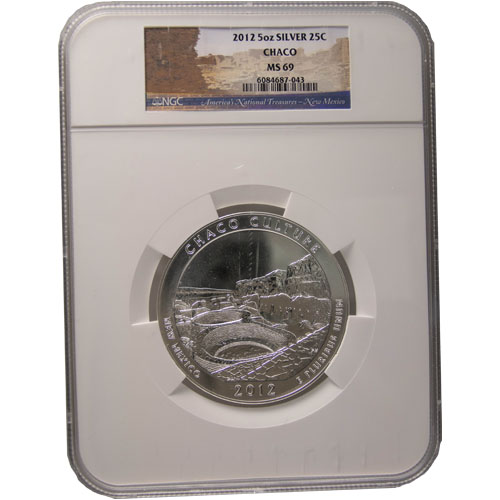 The most famous sites of the ancient pre-Columbian Pueblo cultures in the American southwest are found in Chaco Canyon. The vast complex of Chacoan pueblos was like nothing built before or since and acted as a focus of culture, politics, and religion between the 9th and 13th centuries. Today, they are preserved in the Chaco Culture Natural Historical Park and are celebrated by the U.S. Mint’s limited issue 2012 5 oz Silver ATB Chaco Culture Coin.

Much sought after by collectors and investors, the 2012 5 oz ATB Chaco Culture coin ships in a protective plastic slab from the NGC. These coins are certified Mint State 69, indicating the presence of full, original mint luster and no more than two minor detractions. Examples of acceptable flaws at this grade include minuscule contact marks or hairlines found outside the primary focal points of the coin.

These coins are part of the American the Beautiful series created by the U.S. Mint in 2010 to commemorate iconic American sights. Issued in April of 2012 to showcase one of the country’s most striking and best-preserved legacies of Native American achievement — now a UNESCO World Heritage Site — this limited mintage bears a vivid tribute to the home landscape and signature style of the Chacoan people, sculpted by the award-winning artist Phebe Hemphill.

On its obverse side, the 2012 5 oz ATB Chaco Culture coin carries the inscriptions “Liberty,” “In God We Trust,” and “Quarter Dollar.” They’re arrayed around a portrait of America’s first president identical to that found on the more commonly issued George Washington quarter.

On the reverse side, the coin bears the inscriptions “Chaco Culture,” “2012,” “New Mexico” and “E Pluribus Unum.” At its center is a portrait of Chacoan pueblo architecture, set within the austere beauty of an arid canyon vista. The detail and beauty of the design are sure to capture the interest of historical enthusiasts and avid coin collectors and make an ideal gift for occasions like birthdays or graduations.

Silver.com customer service is always happy to answer your inquiries about silver coins for sale, or any other offerings, at 888-989-7223. You can also reach us online by live chat or send any questions by e-mail.