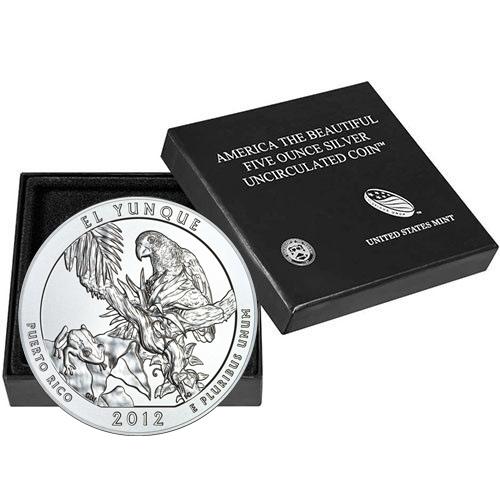 Puerto Rico has some of the most unique environmental conditions in the United States. For example, the Caribbean territory is home to the only tropical rain forest in the United States National Forest system and was established as a protected region by Congress in January 1903. Today, 2012-P 5 oz Burnished Silver ATB El Yunque Coins are available to you online at Silver.com.

El Yunque National Forest was established by the United States Congress as a protected region in 1903, but it had official protections long before that. Prior to the Spanish-American War at the end of the 19th century, Spain controlled the island. King Alfonso XII of Spain set aside the land that is today El Yunque National Forest as early as 1876 for protection. As such, it is one of the oldest reserves in the Western Hemisphere.

All 2012-P 5 oz Burnished Silver ATB El Yunque Coins are available to you today online at Silver.com with their original US Mint boxes. Each coin also comes with a Certificate of Authenticity from the US Mint and a “P” mint mark. Only the burnished silver coins in the ATB Series have mint marks, and all are struck at the Philadelphia Mint rather than the West Point Mint which strikes the silver bullion versions of the coin.

On the reverse of 2012-P 5 oz Burnished Silver ATB El Yunque Coins is the image of a Puerto Rican parrot sitting on the branch of a tree. On a nearby leaf, there is a coqui tree frog which is endemic to the island of Puerto Rico.

The obverse side of 2012 Burnished Silver ATB Coins features the image of President George Washington. The first President of the United States of America, Washington’s left-profile portrait here was designed by John Flanagan in 1932 and has featured on the circulation quarter since that date, making it the longest-running coin design in US history.