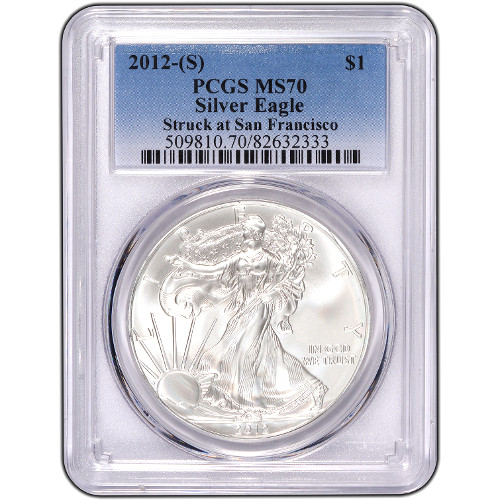 American Silver Eagle coins are among the most coveted with investors and collectors. The government-backed silver content and value of these coins is matched only by the splendor of their design, with classic images of Americana on both the obverse and reverse faces. The 2012 (S) Silver American Eagle Coin is available today at Silver.com with perfect certification.

American Silver Eagle coins feature two of the most iconic images from American coinage history. The heraldic eagle of the United States has appeared on US coins from the US Mint since 1794, with various updates to the design over the course of more than 200 years.

The Walking Liberty design from Adolph A. Weinman is widely considered the second-best American coin design of all time. Created in 1916, it celebrated its 100th anniversary in 2016 with the release of a 24-karat commemorative Walking Liberty Half Dollar gold coin in 2016.

On the obverse of the 2012 (S) American Silver Eagle coin is the image of Walking Liberty created in 1916 by Adolph A. Weinman. Depicting Liberty’s constant march toward a brighter future, she is featured with the American flag over her shoulders and the oak and laurel wreathes in her left hand.

The reverse of all 2012 (S) American Silver Eagle Coins features the heraldic eagle of the United States. This design has featured on American coinage since 1794, and this design from former US Mint Chief Engraver John Mercanti is the latest modernization of this classic design.

Each 2012 (S) American Silver Eagle coin listed here today is in perfect condition according to the PCGS. Coins in Mint State 70 condition feature full, original mint luster and bear no detracting flaws of any kind on the surface areas of the coin.

Originally struck in San Francisco, American Silver Eagles are now produced predominantly at the West Point Mint. However, intense demand for the coins has pushed the San Francisco Mint back into active production.

We encourage all Silver.com associates to contact us with questions. You can reach out to us at 888-989-7223, chat with us live online through our website, or simply email us with your inquiries.