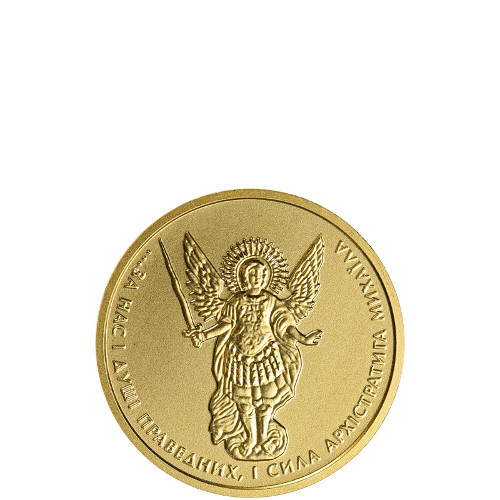 Europe is home to some of the most beautiful coin programs in the world. Ukraine’s bullion coin honors the Archangel Michael from the bible. Now, you can get the 2013 1/10 oz Gold Ukrainian Archangel Michael Coin at Silver.com.

On the obverse of each 2013 1/10 oz Gold Ukrainian Archangel Michael Coin, you will see the image of Saint Michael. The archangel Michael has had a number of different depictions throughout the history of Western civilization, but this image shows his in a full suit of Roman armor. The archangel holds a sword while his wings are outstretched above him. He stands above a dragon, ready to slay the great beast. Around the image, you will see engravings in Ukrainian.

The reverse of each of these coins shows the Ukrainian Coat of Arms. Engravings on this side are in Ukrainian, as well.

All of the coins in this listing are in Brilliant Uncirculated condition. Coins in BU condition will have no signs of wear and tear, but you may see some minor flaws. Flaws that may be present on BU condition coins include breaks in the luster, spotted surfaces and contact marks from the coining process.

Recently, the National Bank of Ukraine has expanded its Gold Ukrainian Archangel Michael Series. Now, the series includes a 1/2 and 1/10 oz coin. These two coins were debuted in 2012. At first, the two new fractional weight coins were very popular, but over the last few years, the 1/4 oz Gold coin has reclaimed its throne as the most popular weight in the gold series of these coins.

The National Bank of Ukraine was created in 1992 after the fall of the Soviet Union. The bank is located in Kiev, and it was first used as a central bank for the region during the Soviet Union. Now, the bank serves the independent government of Ukraine. This bank produces the paper currency and coinage for circulation, as well as the commemorative precious metals products for Ukraine.