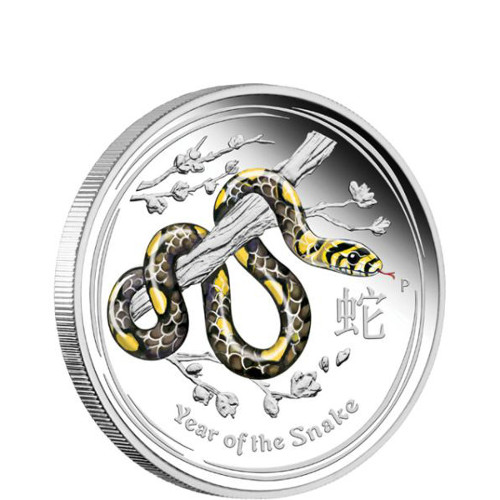 The Year of the Snake occurred in 2013, and the Perth Mint’s release of Lunar Series II coins for the year featured a variety of options. From gold and silver coins to bullion and proof versions, there was an option for every investor and collector. Today, the 2013 1/2 oz Proof Colorized Silver Australian Snake Coin is available to purchase on Silver.com.

Each new release in the Lunar Series II collection features a unique design that honors the particular animal. The Chinese Lunar Calendar has a 12-year cycle, with each of the years assigned a different animal.

In Chinese culture, those born under the sign of a particular animal are said to share characteristics or traits with those creatures. For these particular 2013 1/2 oz Proof Colorized Silver Australian Snake Coins, the finish on the snake design adds a little something extra to its meaning. The black tree snake in the design has yellow on patches of scales, which symbolizes happiness and prosperity.

On the reverse of the 2013 1/2 oz Proof Colorized Silver Australian Snake Coin is the Year of the Snake design. It includes the colorized depiction of a tree snake wrapped around the branch of a tree. Engravings read “Year of the Snake,” include the “P” mint mark of the Perth Mint, and feature the Chinese symbol for snake.

The obverse of all 2013 Silver Year of the Snake coins bears the effigy of Queen Elizabeth II. Created in 1998 and featuring the Queen in right-profile relief, Her Majesty’s portrait on these coins is the fourth-generation depiction of the Queen of England since her ascension to the throne in 1952.

Perth Mint is the oldest operating facility in Australia. Opened in 1899 as the third and final mint facility in the Royal Mint system, the Perth Mint became the oldest mint in the country following Australian federation and the eventual closing of the Sydney Mint and Melbourne Mint. Today it operates separate of the sovereign Royal Australian Mint, and its coins enjoy legal tender status under the Currency Act of 1965.

Please don’t hesitate to reach out to Silver.com if you have any questions. Our customer service associates are available on the phone at 888-989-7223, online using our live web chat, and via our email address.