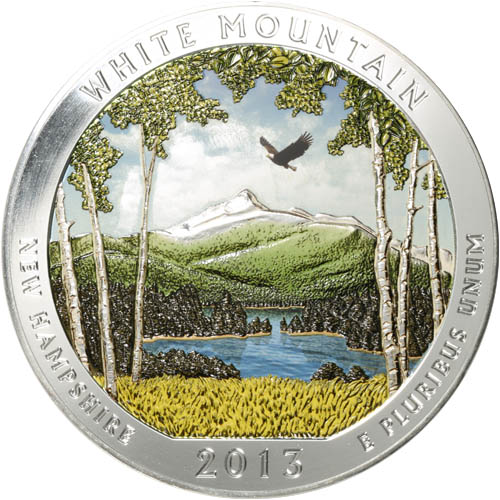 Those who buy silver in the America the Beautiful Series are no doubt familiar with the options in this popular program. The United States Mint produces the coins in Brilliant Uncirculated and Burnished versions with each release, but there are additional options from third-party vendors with enhancements made to the reverse of Brilliant Uncirculated specimens. Today, 2013 5 oz Colorized Silver ATB White Mountain Coins are available to you online at Silver.com.

Mount Chocorua is purported to be one of the most photographed mountain peaks in the world. Though its height is not that impressive compared to others around the globe, standing at just 3,490 feet in height, the rocky outcrop at the very top is often captured as a reflection on the surface of Chocorua Lake at its base. This makes for a very photographable scene.

All of the 2013 5 oz Colorized Silver ATB White Mountain Coins in this listing at Silver.com are in Brilliant Uncirculated condition. The coins ship inside of individual plastic capsules and come with distinctive colorization on the reverse. The colorized lacquer is applied in thin layers to create realistic visuals for the primary design elements on the reverse.

On the obverse face of all 2013 Colorized Silver ATB Coins is an effigy of President George Washington. The first man elected as President of the United States of America, Washington has featured on the nation’s circulating 25-cent piece since 1932. His image was chosen for the quarter in 1932 to replace the Standing Liberty design and to mark the 200th anniversary of his birthday.

The reverse side of the 2013 5 oz Colorized Silver ATB White Mountain Coin includes the design of Mount Chocorua and Chocorua Lake in the White Mountain National Forest. The mountain peak rises high in the distance as the lake bearing its name is surrounded by a dense birch forest as far as the eye can see.

These Colorized Silver ATB White Mountain Coins are BU versions of the coin with a colorized lacquer added by an authorized third-party dealer. The United States Mint does not directly colorize any of its coins.

Please feel free to reach out to Silver.com if you have any questions. You can call our customer service team at 888-989-7223, online using our live chat, and via our email address.