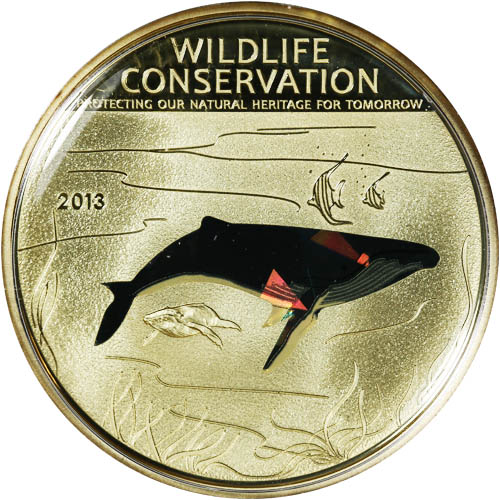 The Wildlife Conservation series has colorized images of many different endangered species worldwide. This 2013-coin release shows the humpback whale, a great creature under the sea. Humpback whales are truly extraordinary creatures, since they can travel great distances and live in all oceans in the world. Today, the 2013 $5 Proof Silver Cook Islands Wildlife Conservation Humpback Whale Prism Coin can be purchased online from Silver.com.

The 2013 $5 Proof Silver Cook Islands Wildlife Conservation Humpback Whale Prism Coin is a wonderful addition for this exclusive coin collection, especially with the colorization of the humpback whale. This 2013 release has a limited mintage of 2,500 coins, which is similar to other coins in the series. The colorization of this 2013 design offers a unique and visually appealing contrast for the viewer.

On the obverse of the 2013 $5 Proof Silver Cook Islands Wildlife Conservation Humpback Whale Prism Coin, the portrait of Queen Elizabeth II is shown. The profile portrait of Her Majesty was originally designed by Raphael Maklouf. This effigy has since been used on many different coin releases and designs. The obverse of this 2013 coin also shows the coin’s value and country of origin. The inscription “ELIZABETH II” is seen behind Queen Elizabeth II’s profile.

The reverse of the 2013 $5 Proof Silver Cook Islands Wildlife Conservation Humpback Whale Prism Coin shows the colorized design of the humpback whale. There’s also a baby whale next to the adult whale, though it remains in greyscale and blends in with the ocean background. The reverse also shows two fish swimming along with the two whales. Two inscriptions appear on the reverse: “WILDLIFE CONSERVATION” and “PROTECTING OUR NATURAL HERITAGE FOR TOMORROW”.

For more information about this listing or other silver for sale, please reach out to us at Silver.com. Our customer service team is available via email, online live chat, or by phone at 888-989-7223.