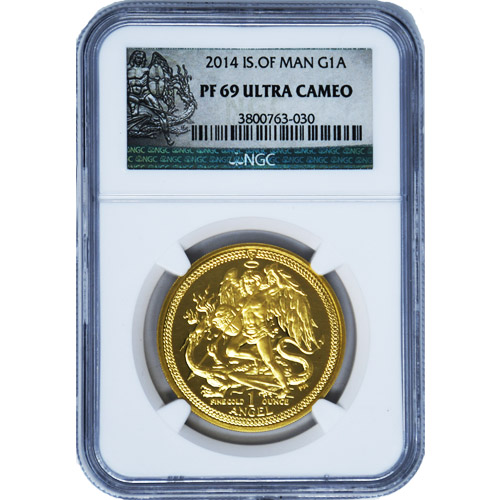 When ordering a coin from this listing, you get a 2014 1 oz Proof Gold Isle of Man Angel Coin in an NGC plastic slab that is certified in near-perfect condition. These coins have all been given a Proof 69 grade from the NGC, meaning that they will have only minor flaws when viewed under magnification.

The Ultra Cameo, or UCAM, designation that these gold bullion coins have been given means that they have heavily frosted design fields and deeply-mirrored backgrounds.

The effigy of Queen Elizabeth II can be found on the obverse face of each of these coins. This particular image of the Queen was created by Ian Rank-Broadly in 1998. It was used on commonwealth coinage from 1998 to 2014. In this depiction of Her Majesty, she is 70 years old. You can find the engravings “ELIZABETH II,” “ISLE OF MAN,” and “2014” on this face of the coin.

On the reverse of each 2014 1 oz Proof Gold Isle of Man Angel Coin, you will find a new design. Archangel St. Michael is still slaying a dragon, but this time, the image shows him facing to the left. In the design, St. Michael stabs a spear through the dragon’s neck. The engravings on this side of the coin include “FINE GOLD 1 OUNCE” and “ANGEL.”

These coins are also called Manx Angels. They are unique because they have value as legal tender, but unlike most coins, they haven’t been assigned a specific face value. Much like the South African Krugerrand and Mexican Libertad, these coins are given a value based on the metal content of the coin.

Pobjoy Mint is responsible for minting these coins from 1984 to 2016. This mint was founded by Derek Pobjoy in 1965, making it a relatively new mint. Pobjoy Mint is located in the United Kingdom.

For assistance during the ordering process, or if you have any questions, please contact Silver.com. You can reach our customer service team directly via email, live chat, and by phone at 888-989-7223.