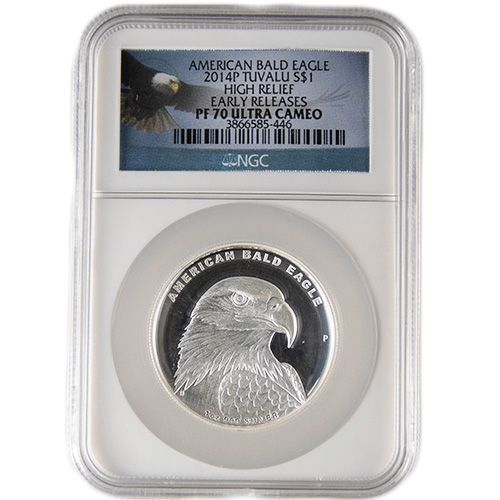 In 2014, the Perth Mint issued one of its latest design offerings symbolic of the relationship shared between the nations of Australia and the United States. In addition to other commemorative and one-off issues from Perth Mint with American design themes, the 2014 Proof Silver Tuvalu Bald Eagle celebrated the majestic symbol of the United States. Today, 2014 1 oz Proof Silver Tuvalu Bald Eagles in perfect condition are available to you online from Silver.com.

The so-called bald eagle of the United States is actually a member of the sea eagle species. Historically speaking, the bald eagle earned its name because of the white plumage present on the head of the eagles. However, not all bald eagles have this plumage coloration. This occurs as the eagles reach maturity, with many young bald eagles having a full plumage of brown.

All of the 2014 1 oz Proof Silver Tuvalu Bald Eagles in this listing come to you NGC plastic slabs to protect the PF70 condition of the coin. Coins in PF70 condition have full, original mint luster and lack all possible detracting flaws. Early Release specimens are those coins the NGC receives for grading within 30 days of the original release from the mint.

On the obverse side of 2014 Proof Silver Bald Eagles is a bust of Queen Elizabeth II. The longest-reigning monarch in English history, Queen Elizabeth II is featured here in right-profile relief wearing the Girls of Great Britain and Ireland Tiara. This design was created in 1998 by Ian Rank-Broadley.

The reverse field of the 2014 1 oz Proof Tuvalu Bald Eagle comes with a depiction of America’s preeminent symbol. The bald eagle was adopted by the Founding Fathers in 1792 to serve as the emblem of the nation due to its majesty, power, and longevity.

Please contact Silver.com if you have any questions about these 1 oz silver coins. You can call us at 888-989-7223, chat with us live online, or email us directly.